The Reserve Bank of India (RBI) on Wednesday announced relaxation in gold import rules and allowed star/premier trading houses to sell the yellow metal in the domestic market, reversing the curbs imposed in July last year in the wake of a spurt in the country's current account deficit. 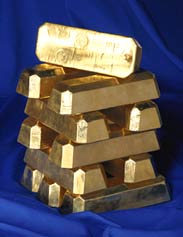 RBI has now allowed nominated bank / agency / any other entity, importing gold routed through custom bonded warehouses, to procure gold, if considered necessary, through two invoices – 20 per cent for exporters and the other 80 per cent one domestic users.

Out of the total, 20 per cent of gold held in the bonded warehouse can be released, in part or full, to be made available to the exporters of gold against an undertaking to the customs authorities as is the existing practice. The balance 80 kg can be sold / lent in part or full to domestic entities engaged in jewellery business / bullion dealers/ banks operating the Gold Deposit Scheme (GDS) and Gold Metal Loan (GML).

The sale of imported gold will be against full upfront payment, except in the case of GML, where nominated banks can give GML to domestic jewellery manufacturers to the extent of GML outstanding in their books as on 31 March 2013. In other words, no credit sale of gold in any form will be permitted for domestic use, except for GML.

In case the nominated bank itself is operating the Gold Deposit Scheme and extending gold metal loans out of gold mobilised under GDS, the bank will be permitted to use, out of 80 kg, a portion for replenishing gold given as GML, RBI said.

Customs clearances will be allowed for the next lot of import gold by any nominated agency only after the proof of export (ie 20 per cent of the imported lot) is submitted.

RBI had, in July, banned imports by trading houses for sale in the local market and had restricted import only for re-exports.

The RBI decision, which will increase the supply of gold, has already shown results with gold prices in Mumbai hovering around Rs28,300 per 10 grams late on Wednesday, down from Rs28,800 level at 5 pm.

RBI has been emboldened by the recent strength of the rupee, which on Wednesday closed at 58.78, and a growing foreign currency reserve which was at $313 billion as of 9 May, up from $277 billion on 23 August 2013.