State-owned Oriental Bank of Commerce (OBC) is reported to have sought merger with Indian Bank and Corporation Bank, both loss-making lenders, in a move which is in line with the government’s aim to consolidate banking sector operations. 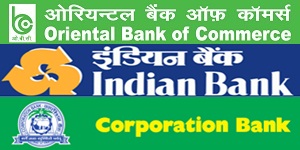 A report in the Financial Express citing banking sources said OBC has sought the finance ministry’s approval to merge with Indian Bank and Corporation Bank and that the ministry is expected to consider OBC’s proposal and take a view soon.
However, there is no formal announcement from the finance ministry on the matter yet.
The merger, if implemented, will create the third-largest bank after the merged State Bank of India and the new Bank of Baroda.
With the successful merger of State Bank of India with five of its subsidiaries and Bharatiya Mahila Bank, and the amalgamation of Bank of Baroda, Vijaya Bank and Dena bank, the government is confident that banking sector consolidation can be carried out without any hitches.
By merging these medium sized banks into larger banks with increased size and scale of operation, the government hopes to create stronger banks with much larger balance sheet to support the rising credit appetite of the fast-growing economy and enable optimum utilisation of resources.
Gurugram-based OBC, which was facing restrictions under the central bank’s Prompt Corrective Action (PCA) framework until early February, recorded a net profit of Rs201.5 crore in the March quarter against a net loss of Rs1,650.22 crore a year earlier. OBC’s profit rose 39 per cent sequentially as well.
Mangalore-based Corporation Bank’s losses, on the other hand, ballooned to Rs6,581.49 crore during the fourth quarter of FY19, from Rs1,838.39 crore a year before.
Chennai-based Indian Bank saw a net loss of Rs190 crore in the January-March 2018-19 quarter, against a net profit of Rs132 crore in the same period last fiscal.
As of end-March 2019, OBC had net NPA ratio of 5.93 per cent, while Corporation Bank and Indian Bank had NPAs of 5.71 per cent and 3.75 per cent, respectively.
Upon amalgamation, the merged entity will have combined deposits estimated at Rs6,60,000 crore and advances of Rs4,80,000 crore.
Meanwhile, reports said the government may infuse Rs40,000-50,000 crore into public sector banks this fiscal, which is over and above the Rs1,06,000 crore provided in FY19.
MORE REPORTS