Fugitive jeweller Nirav Modi, the alleged kingpin of the Rs11,400-crore fraud on Punjab National Bank (PNB), has said PNB's haste has shut the doors on his ability to clear the dues, even as the Central Bureau of Investigation ordered closure of PNB's Mumbai branch and arrested three more officials of the bank in connection with the bank loan fraud allegedly carried out by Nirav Modi and his family. 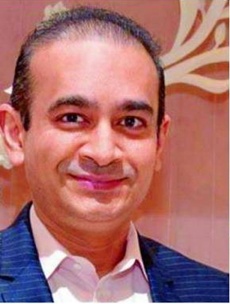 Modi is reported to have written to the banks saying that the firms controlled by him were unable to clear their dues because of the actions taken in "haste" by PNB. He asked the banks to pay salaries to the 2,200 employees working in those firms from the money in his firms' current accounts.

Modi also said the dues were much less than what the bank had claimed, and that his relatives have nothing to do with the operations of the firms under investigation.

"In the anxiety to recover your dues immediately, despite my offer, your actions have destroyed my brand and the business and have now restricted your ability to recover all the dues leaving a trail of unpaid debts," Modi said in his letter to banks.

"I would request you to permit salaries for FIPL and FDIPL to be paid for the 2,200 employees from the balance lying in the current accounts. Our HR head will send you a breakup of the monthly salary," Modi wrote in the letter.

Modi also requested banks to allow him to sell the Firestar group. "Even after your complaint was filed, in good faith I wrote to you saying please sell / allow me to sell Firestar Group, or their valuable assets, and recover the dues not just from Firestar Group, but also from the three firms," Modi's letter said.

He said the inventory, including assets and receivables of FIPL and FDIPL and three other firms could have settled the pending dues to the banks. "However, now that stage appears to have passed, and there is a general panic," he said, adding that the valuation of the firms stood at Rs6,500 crore.

The CBI, meanwhile, intensified its search operation after freezing business transactions at the Brady Road branch of the PNB in Mumbai from where all the LOUs and LCs were issued, officials said.

The agency also arrested three PNB officials, including Bechhu B Tiwari, chief manager and in-charge of foreign exchange department; Yashwant Joshi, scale-II manager at the forex department; and Praful Sawant, a Scale-I officer (export). These officials were arrested after the CBI questioned all officers of the bank and after being convinced of their role in the scam, sources said.

The CBI conducted searches at 38 other locations in several cities across the country, including Mumbai, Pune, Aurangabad, Thane, Kolkata, Delhi, Jammu, Lucknow, Bengaluru and Surat.

The agency has so far seized gems and jewellery valued at around Rs5,671 crore.