US financial regulators have slapped a $225 million fine on Pakistan-based Habib Bank and forced closure of its New York City branch for breach of New York's anti-terrorism and money laundering laws. 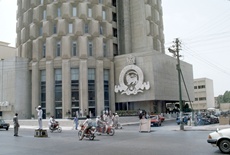 Habib Bank, Pakistan's top lender, is found to have facilitated transactions worth billions of dollars with Saudi Arabia's Al Rajhi Bank that had reported links with al Qaeda, among other breaches.

Officials of the Department of Financial Services also said Habib has repeatedly failed to correct ''glaring deficiencies'' in its internal safeguards for preventing money laundering and terror financing.

Managers in Habib's branch office in Manhattan failed for more than a decade to shore up weak anti-money-laundering controls and sanctions compliance, New York's Department of Financial Services said in orders issued on Thursday.

The bank facilitated at least 13,000 transactions involving at least $250 million through its Manhattan branch without proper screening for prohibited transactions or dealings with sanctioned countries, officials revealed.

"DFS will not tolerate inadequate risk and compliance functions that open the door to the financing of terrorist activities that pose a grave threat to the people of this state and the financial system as a whole," Financial Services Superintendent Maria Vullo said.

''The bank has repeatedly been given more than sufficient opportunity to correct its glaring deficiencies, yet it has failed to do so.''

Habib Bank continued to violate the terms of a 2006 agreement in which it promised to improve its internal controls.

Subsequently, in 2015, the regulators asked the bank to hire an independent consultant to review its dollar-clearing activities.

In a follow-up examination by DFS in 2016, Habib received the lowest rating.

The agreement had called for a review of Habib Bank's dollar clearing transactions by an outside monitor back to 2013, as part of an orderly wind-down of Habib's New York branch.

The bank announced the closure of its Manhattan branch on 28 August.

Habib bank, however, paid a lower penalty of $225 million against the maximum $630 million proposed by the New York regulator.

Karachi-based Habib Bank is Pakistan's largest bank, with $24 billion in total assets, according to DFS. The New York branch has been licensed by DFS since 1978.