The zero-balance Jan Dhan accounts saw inflows of Rs21,000 crore since the 8 November announcement demonetising the Rs500 and Rs1,000 currency notes after the government gave a 50-day window for holders of such currency to deposit these in their accounts and convert these into legal tender. 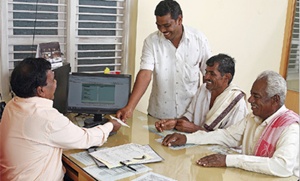 As of 2 November 2016, a total of 254.4 million bank accounts under the Pradhan Mantri Jan Dhan Yojan (PMJDY) have been opened across the country.  The maximum and minimum number of beneficiaries under the scheme are in the states of Uttar Pradesh and Sikkim, respectively. In Andaman and Nicobar Islands the number of PMJDY as of 2 November stood at 55,131.

Reports say most of the money flows into Jan Dhan accounts were in the states of West Bengal and Karnataka, translating into huge cash hoards in these states.

The central government and the Reserve Bank of India (RBI) had last week cautioned Jan Dhan account holders, housewives and artisans against depositing others' money in their Jan Dhan or other accounts. Authorities have warned of prosecution of such people under the I-T Act if they allow misuse of their bank accounts through deposit of black money in Rs500 / 1,000 notes during the 50-day window till 30 December.

RBI issued a warning following reports that some unscrupulous people are using other people's bank accounts to convert their black money into new denomination notes. In some cases, even rewards are being given to account holders for allowing such misuse.

The government had earlier said deposits of up to Rs2.50 lakh in bank accounts would not come under tax scrutiny as it is within the tax exemption limit. In the case of Jan Dhan account, the holder can deposit up to Rs50,000.

People seems to have taken lightly the warnings of action on deposits over Rs2.50 lakh and have continued to deposit money in whatever accounts they can, according to the income tax department.

The finance ministry too has warned "such tax evasion activities can be made subject to income tax and penalty if it is established that the amount deposited in the account was not of the account holder but of somebody else. Also, the person who allows his or her account to be misused for this purpose can be prosecuted for abetment under the Income Tax Act".

The government has earlier said black money deposited in bank accounts during the 50-day period will be subject to tax, interest and 200 per cent penalty, although it did not explain how.

Third party deposits in Jan Dhan accounts will now be treated as benami property and holders of such accounts will be subject to criminal prosecution under the Act.