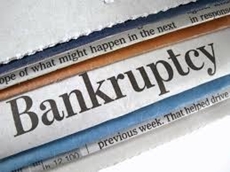 "A huge and game changing reform measure," economic affairs secretary Shaktikanta Das said on Twitter. "It's a big day for economic reforms in India. The country moves ahead towards higher growth."

The Insolvency and Bankruptcy Code Bill, seeking to update and consolidate a number of existing laws, was passed with opposition support, which otherwise would have been difficult in the Upper House where the ruling party is in a minority.

The bankruptcy code, earlier passed by the Lok Sabha, and will now be signed into law by the President, will unify more than four overlapping sets of rules and help slash time taken to wind up a dying company or recover dues from a defaulter.

The new Act will strengthen the hands of lenders to recover outstanding debts within a 180-day deadline.

The bill's passage is also perhaps the first major success for the Modi government after opponents in Parliament blocked several other pieces of legislation, including the one on the national goods and services tax.

The new bill provides for the setting up of information utilities that would provide creditors with information about borrowers, such as the amount of money borrowed by them and time taken to repay it or the current status of the loans.

Minister of state for finance Jayant Sinha tweeted, "History is written today as Rajya Sabha passes Bankruptcy Bill! Thank you to MPs and officers who worked on the bill".

The new legislation will help tame high-profile debtors like liquor baron Vijay Mallya who flew to London as bankers pressed him to repay about $1.4 billion owed by his defunct Kingfisher Airlines.

"This is something which should put company promoters on guard," said M R Umarji, adviser to the Indian Banks' Association. "They will think twice before committing a default."

He said the bankers could initiate provisions of the law in ongoing default cases once the insolvency court and other required institutions were set up.

Creditors in India hardly manage to recover about 25.7 cents on each dollar in the 42 months that it takes to resolve insolvency, compared with 80.4 cents in the US after less than half that time, World Bank data shows.

The World Bank estimates that winding up an ailing company in India typically takes four years, or twice as long as in China and Russia, with an average recovery of 25.7 cents on the dollar, making it one of the worst rates even among emerging market economies.

"Over the long term, it will enhance creditor rights, boost investor confidence and facilitate deepening of India's corporate bond market." analysts including Pawan Agrawal at Crisil Ltd, wrote in a report.

Under the new law, a debtor could be jailed for up to five years for concealing property or defrauding creditors. Bankrupt individuals would be barred from contesting elections as well.

At present, even courts are reluctant to sign "death warrants" against defaulting companies to safeguard jobs, say bankers.

The new law would empower creditors to decide whether a defaulter is declared insolvent or not, though legally their decision could still be challenged in the higher courts.

Currently, over 70,000 liquidation cases are pending in debt recovery tribunals and courts.