With in-principle approval given to 21 new niche banks, and the PM's Jan Dhan Yojana scheme, the Indian banking sector is poised for a shake-up, and inclusive banking has been given a boost. But banks will have to be nimble and make good use of technology to survive in the new scenario, say Probir Roy, co-founder, Paymate and Sumita Kale of Indicus Centre for Financial Inclusion

As we embark on a new paradigm of differentiated banking for financial inclusion, it is a point to keep in mind that more has been done in a year via the prime minister's Jan Dhan Yojana (PMJDY) than in several decades of traditional commercial banking. That one initiative can lead to the opening of about 180 million accounts covering 99 per cent of Indian households within a year, and more importantly, energising significant awareness within the masses. This is something which needs to be reflected upon by policy makers and practitioners.

That aside, the true test for disruptive banking will lie in sustaining the momentum and pace set in 2014 and there are a number of challenges for the new paradigm to make significant strides towards India's goals of universal financial inclusion and less-cash economy.

Whilst the step-up given by the PMJDY is significant, the real inflexion will happen when the new banks migrate their existing customers from postal savings, micro-finance clients, pre-paid subscribers etc into regular savings accounts.

This has the potential to add another 100 million accounts within the next 18 months from currently unserved or missing markets. These new accounts are expected to be more active, with higher frequency and width of usage. Whilst transactions may be relatively small value, they will be high frequency since they will cater to daily payments, and over time, saving, expense and credit transactions.

This covers retail payments for recharges, ticketing, utility payments, m-commerce etc and on the deposit side from pensions, NREGA, insurance and in time all direct benefit transfers. It is the flow of fees from the latter plus cross selling of innovative third party financial products which will improve the new banks' viability within a short time.

The niche banks on the other hand will best be served by focusing on new customers, those who have yet to engage with the formal banking system; competition here amongst these new banks should work to the advantage of the low income customers.

Interoperability of players is another key to a level playing field that will serve the financial needs of low income customers. For instance, the new banks can also work as business correspondents (BCs) for existing banks; crowding out existing BCs will further queer the economics and scaling abilities of the chequered BC model. Interoperability of BCs will help augment, rather than reduce, the network under the new framework.

Further, interoperability that allows funds transfer across bank and mobile wallets would boost linkages with the pre-paid instrument issuers network; NPCI platforms are already available to provide this frictionless consumer experience where wallets can interoperate across merchants seamlessly.

The jump in transactions through PPIs since June 2014 shows the significant potential that will lead to increased adoption of digital transactions; there is tremendous scope for a dramatic rise in the number of such accounts that connect to the transaction needs of low income customers.

The ultimate test of the new framework will be in the deployment of technology. Much lip service has been paid to this element. Except for a few, most new entrants do not necessarily have an established record of nimble, innovative or even disruptive use of home-grown payments technology. Here new banks would be well served by partnering with existing tech innovators to acquire technology, platforms, product and services and then tweak those for differentiation.

Finally, user friendly and appealing consumer products and interface are crucial, including use of the vernacular, SMS/IVR or USSD catering to local pain points of basic and easy access to formal financial services. Some commercial banks have already realized this, re-jigging their offerings into more user friendly and innovative digital banking products and services via branded apps, tie ups with popular online brands and retailers and use of social media to drive adoption.

While all modes of electronic transactions have been showing consistent growth over the past few years, the latest to zoom upwards sharply since mid-2014 are mobile banking and mobile wallets. KPMG's Global Mobile Banking Report 2015 places India fifth worldwide in mobile banking penetration, while RBI data shows that annual mobile banking transactions value over Rs1,272 billion.

The IMPS ecosystem alone does 16 million transactions a month, up from one million a month in 2013. This is just the tip of the iceberg, and the upside is significant. Poised as we are for digitized payments being adopted on a scale not seen before, unless the aforementioned challenges are met, we are on a bumpy road towards a more inclusive and less-cash economy. 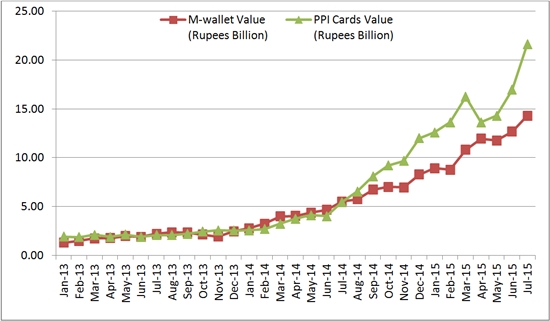 Probir Roy is Co-Founder, Paymate and Sumita Kale is with the Indicus Centre for Financial Inclusion. Views are personal.