The UK treasury is set to sell £13 billion ($19.8 billion) of mortgage assets it acquired from beleaguered lender Northern Rock during the global financial crisis to US private equity firm Cerberus Capital Management LP. 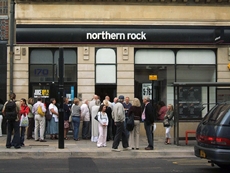 The deal is the biggest ever sale of mortgage loan book in Europe, making Cerberus the biggest buyer of European loans.

Northern Rock was nationalised in 2008, following the subprime lending crisis, and in 2010, it was split into Northern Rock Plc, the good bank, and Northern Rock Asset Management Plc (NRAM), the bad bank, with the former handling the banking operation and the latter its troubled assets.

"Today marks another major milestone in clearing up the mess left by the financial crisis," the UK finance minister George Osborne said.

The UK Asset Resolution Ltd (UKAR), a holding company 100-per cent owned by the treasury, and holder of NRAM Plc as well as another troubled bank Bradford & Bingley Plc, said it has conducted a lengthy and rigorous bidding process to select Cerberus as the buyer of the huge loans portfolio.

''The sale comprises performing and non-performing residential mortgages and unsecured loans from the legacy book of NRAM, the former Northern Rock mortgage business,'' it said.

The assets were sold at approximately £280 million premium over book value as at the end of June 2015, recouping taxpayer money.

UKAR chief executive officer Richard Banks commented, ''The sale of this £13 billion loan book is a significant step in accelerating the repayment of our government loans and demonstrates our continuing success in maximising value for taxpayers.''

The firm's chairman Jown Snow said, ''Cerberus prides itself on having earned the trust of financial institutions and regulators across Europe, who recognize our expertise and significant experience in responsibly managing loan portfolios.

Cerberus said the management of the mortgage assets will remain with the UKAR.

Cerberus plans to sell £3.3-billion of the assets to TSB Bank Plc, the British bank bought by Spanish lender Sabadell earlier in July.

With the current sale, UKAR will reduce its holdings portfolio by £73.5 billion or 63 per cent since its formation. It intends to repay around £5.5 NRAM government loan following the transaction.

In recent months, the UK treasury has been selling its stake in Lloyds Banking Group and also started selling part of its interest in Royal Bank of Scotland to recover bailout money.

Credit Suisse acted as adviser to UKAR in the transaction while Morgan Stanley advised Cerberus and arranged the hefty financing.