Come next month, and banks in the country will remain shut on the second and fourth Saturday's of every month, making available two consecutive holidays for bank employees who otherwise work half-a-day on all Saturdays. 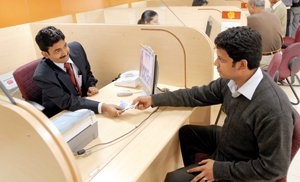 The government has accepted the long-pending demand of workers to declare second and fourth Saturdays holidays, with effect from 1 September.

At present, all PSU and private sector banks work half-day on Saturdays. From September, however, there will be no half-days as bank staff will have to work the entire day on the first and fifth Saturdays.

''As of now, they are working on all Saturdays from 10 am to 2 pm. Beginning September, they will have two alternate Saturdays as holidays and have to work from 10 am to 5 pm on the first and third Saturdays,'' AIBEA general secretary C H Venkatachalam said.

In case of a month with a fifth Saturday, banks will be closed only on second and fourth Saturdays, he noted.

"This is a welcome move. This will be a big relief to employees and I hope that this will improve the productivity,"

This announcement is being made as part of the agreement arrived at during the 10th bipartite wage settlement between the IBA and bank employees' unions in June this year.