Spanish banking giant Banco Santander SA plans to raise up to €7.5 billion ($8.9 billion) in fresh capital through issue of new shares to strengthen its balance sheet, the lender said in a filing withthe Madrid stock exchange.

"This operation will be carried out through an accelerated placement," Santander said without elaborating the details.

Madrid-based Santander, the euro zone's biggest bank with a market capitalisation close to $95 billion, is set to raise nearly 10 per cent of its current market value through the share issue.

It is believed that the bank's new chairwoman Ana Botin, 54, who took over the reins of the lender after the death of her father Emilio Botin in September, is looking to strengthen the bank's balance sheet to improve its competitiveness.

Just two months after her taking over, Botin shuffled the top management by removing Javier Marin, the bank's chief executive appointed by her father two years ago and promoting Jose Antonio Alvrez, the bank's chief financial officer, as the new head.

Earlier, Santander raised €7.2 billion in 2008, at the height of the sub-prime lending crisis to improve its capital ratio. The bank had to write off billions in toxic assets, with some €19 billion wiped out from its books in 2012 alone.

Santander has also cut its dividend payouts sharply to 20 cents a share this year, from 60 cents in the previous year.

The lender plans a change in its dividend distribution policy by offering cash for three of the four payments expected this year, while the other will be in shares. 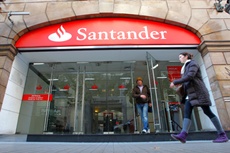 According to some analysts, the capital raising and slashing of dividend could allay two major concerns of investors, as Santander is one of the weakest capitalised banks in Europe according to Basel III banking norms with a capital ratio of around 8.5, and its dividend payout ratio is also high.

New capital injection is expected to increase the bank's capital ratio to around 10 per cent.

According to Thomson Reuter's data, Santander's capital-raising plan would be second-largest set by a bank over the last year, after Deutsche Bank's €8.5 billion share offering in June 2014.

Under Emilio Botin who ruled the bank for nearly three decades, Santander had grown from a regional lender to Spain's largest bank by assets primarily through its big expansion overseas into Brazil, the UK and the US through acquisitions.

Santander said that in 2014 its net profit jumped more than 30 per cent to €5.8 billion compared to the previous year.

Shares in Santander were up by over three per cent on Thursday before trading was suspended by the stock market regulator pending the announcement from the bank.