Subsidised agricultural credit may be getting diverted: RBI chief 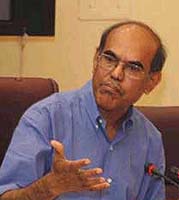 Reserve Bank governor D Subbarao yesterday said it was possible that subsidised agricultural credit was getting diverted for  other purposes and suggested modification of the scheme.

He said anecdotal evidence seemed to suggest some agricultural loans, contracted at a sub-market rate of interest because of the subvention, were being diverted for non-agricultural purposes.

Subbarao was speaking at a function in Mumbai to mark the 30th foundation day of the National Bank for Agriculture and Rural Development (Nabard). The RBI governor, said he had observed the trend during his recent visits to some bank branches in different parts of the country.

He said there was a need to modify the interest subvention scheme under which the government subsidised interest cost for an agricultual loan and tightened the end-use factors while granting the credit, he added.

Under interest subvention, farmers pay an interest of only 4 per cent per annum. Subbarao also called for a discussion on subsidies to agricultural credit.

The governor, criticising the spike in banks' non-performing assets (NPAs) due to a migration to system-driven NPAs said he did not know that that meant. He added there seemed to be some new technology for system wide identification.

The governor also expressed concern over the government "occasionally exercising" its ownership rights in banks and financial institutions through channels outside of their boards, and asked it to show exemplary corporate governance.

"There are questions about how the government will play out its ownership role. This is not restricted to Nabard, it is something which is being played out in a number of institutions including the commercial banks."