Perhaps alone among those concerned with the environment, union environment minister Prakash Javadekar today refused to link the rain-ravaged situation in Tamil Nadu directly to climate change, saying it was a natural calamity. 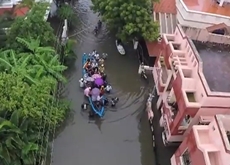 ''What has happened in Chennai over last ten days is absolutely a very serious situation, this can't be directly attributed to climate change; it is a natural calamity, but this calamity needs to be tackled effectively,'' Javadekar told the media in New Delhi.

His statement is all the more strange because it is in direct contradiction of his boss Prime Minister Narendra Modi, who, in his 'Man ki Baat' radio programme ahead of the Paris climate summit, clearly linked the Tamil Nadu situation to climate change.

''We are now experiencing the impact of fast-changing climate. In our own country, massive rains recently hit Tamil Nadu and caused losses to it as well as other states. Several people lost their lives. I offer my condolences to them," he had said on Monday. (See: Modi leaves for crucial Paris climate summit)

''The NDRF (National Disaster Relief Force) and other agencies are already doing all kinds of the relief work in coalition with the state government,'' Javedkar said.

He also said that all these instances were taking place because of the frequency of irregular monsoons. But he failed to explain why, if not for climate change, the monsoons had become irregular.

''We must take immediate steps to prevent any such damage in such occurrences, and therefore, we need to keep our drains clean and open, and we must allow water to flow naturally, even in urbanised India,'' he added.

Meanwhile, Prime Minister Modi met senior cabinet ministers, including Rajnath Singh, Arun Jaitley, Sushma Swaraj and Venkaiah Naidu and reportedly discussed emergency measures to be taken to assist the government in Tamil Nadu, and especially help the people of Chennai, which has been the recipient of heavy rains over the last week.

Parliamentary affairs minister M Venkaiah Naidu said the union government was willing to extend all support, saying, ''This is not just a Chennai problem, it is a problem of the entire country.''

The India Meteorological Department said a slow-moving depression over southwest Bay of Bengal has triggered the fresh bout of heavy rain in Tamil Nadu, which is still smarting from a cyclonic storm that hit the state in November.