The Supreme Court on Wednesday cleared the decks for monetary compensation to oustees of the Sardar Sarovar Project (SSP) on river Narmada in Madhya Pradesh, ordering Rs60 lakh compensation for each of the families that are likely to be displaced. 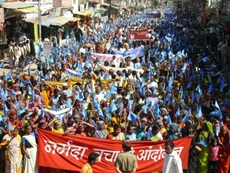 The apex court's directive to pay final compensation to the oustees paves the way for the dam to operate at its full capacity.

A bench headed by Chief Justice JS Khehar ordered payment of Rs60 lakh each to 681 families in Madhya Pradesh who did not receive compensation towards purchase of land in lieu of the property they lost under the acquisition proceedings for the project.

The three-judge bench ordered payment of compensation within two months as cost of two hectares of land with an undertaking from the displaced families that they would vacate the land by 31 July, failing which the authorities would have the right to forcibly evict them.

SC also ordered payment of Rs15 lakh each to 1,358 families, who had accepted compensation earlier.

''They need to be further compensated so as to alleviate their hardship and enable them to purchase alternative land,'' the bench said. However, the court clarified that the amount already received by them would be deducted from this amount.

The apex court asked Gujarat government to give the money to Madhya Pradesh for further distribution through the grievance redressal authority headed by a retired high court judge. The order on compensation is confined to Madhya Pradesh as the maximum oustees are from the state.

The bench, also comprising justices N V Ramana and D Y Chandrachud, observed that the monetary compensation was considered as land compensation was not feasible in the absence of a land bank.

Narmada Bachao Andolan (NBA), which is leading the campaign for the oustees, was also of the view that there good land was not available to be given as compensation.

As far as Maharashtra and Gujarat were concerned, the apex court said relief and rehabilitation work has to be completed within three months.

Earlier in the day, the bench proposed to set up a committee comprising retired Supreme Court judges V S Sirpurkar, K S Radhakrishnan and C Nagappan to look into the compensation aspect.

The court also pulled up the Medha Patkar-led NBA for trying to "stall" the project saying they wanted to hold the government and the court to "ransom".