Mumbai lost in the rains, in just a day

Heavy rainfall has hit normal life in Mumbai with water logging bringing road and rail traffic to a grinding halt and flooding of roads affecting movement of people to even nearby locations.

Heavy and incessant rains since Thursday have flooded roads and rail tracks in the city, bringing vehicular traffic to a standstill. Schools have been shut following an alert from the Mumbai Municipal Corporation and office goers have been held up at railway stations.

With the tracks getting flooded over most low lying areas like Parel, Sion and Kurla, trains on both Central and Harbour lines have come to a standstill.

Water from the rains entered houses in low-lying areas with water logging reported at several locations across the city.

South Mumbai recorded an average rainfall of around 188mm and Western suburbs of around 172mm over the last 24 hours.

Brihanmumbai Municipal Corporation (BMC) has advised people to stay indoors and travel only in case of an emergency. The incessant rainfall in the city and the forecast of intermittent rain in the next 24 hours has led BMC to cancel all municipality-run schools for the day.

Mumbai University has declared to call off all theory and practical examinations which were scheduled to be held on Friday.

Residents will have a tough ride ahead on Friday as suburban services on all the three railway lines of Central railway (CR) and Western railway (WR) in Mumbai have been suspended. Several commuters had to return back home from stations.

CR suburban services on both main and harbour lines between CST and Thane, and WR train services between Churchgate-Andheri were completely stopped. 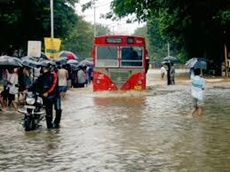 "It is advised to all that commuters may travel only in case of emergency," said a WR spokesperson.

Though CR claimed Thane-Karjat/Kasara and Vashi-Panvel shuttle services and Thane-Vashi Trans-Harbour services are running, commuters said there were hardly any trains plying. The situation is similar on WR too.