Pipavav Shipyard has signed separate agreements with the US-based Northrop Grumman Corp and the UK-based Babcock group for building aircraft carriers for the Indian Navy. 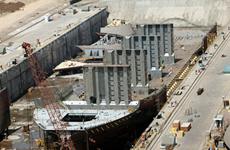 The deal gives it access to the technology and expertise in military hardware for use in warships, Pipavav said in a filing with the Bombay Stock Exchange (BSE).

"For building warships you need to have three things - world class facility, defence production licence and FIPB approval. So now we have all three of them in place and will be bidding for any opportunity in this field.

There is a lot of potential in this field and we are proud to have Northrop as our partners which gives us an edge above the rest to build complex warships," said Nikhil Gandhi, non-executive director &and chairman, Pipavav Shipyard.