The Indian economy has recovered from the impact of demonetisation and the introduction of Goods and Services Tax, and growth is expected to accelerate from 6.7 per cent in 2017 to 7.3 per cent in 2018, according to the World Bank. 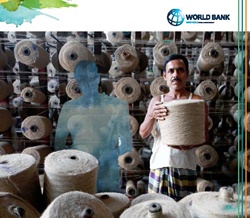 The bank, in its bi-annual South Asia Economic Focus (SAEF) report notes that the Indian economy will expand at 7.5 per cent in 2019 and 2020 thanks a to a sustained recovery in private investment and private consumption.
“The country should strive to accelerate investments and exports to take advantage of the recovery in global growth,” says the bank. “Every month, the working age increases by 1.3 million people and India must create 8.1 million jobs a year to maintain its employment rate, which has been declining based on employment data analysed from 2005 to 2015, largely due to women leaving the job market.”
According to Robert Beyer, the author of the report, “growth is important, but even very high growth will alone not be enough to increase South Asia’s employment rate.” Policies and actions are needed to make growth more labour-intensive, and especially to create the kind of jobs that can encourage greater participation by women.
The report focuses on the eight-nation South Asian region (which besides India includes Afghanistan, Bangladesh, Bhutan, Maldives, Nepal, Pakistan and Sri Lanka), which the bank says, has regained its lead as the fastest growing region in the world, supported by recovery in India.
“With the right mix of policies and reforms, growth is expected to accelerate to 6.9 percent in 2018 and 7.1 percent next year,” for South Asia as a whole, it adds.
According to the SAEF, the region could even extend its lead over East Asia and the Pacific. “Much of the progress, however, is driven by India’s growth rebound and is not consistent across countries,” it adds. “Despite accelerating global growth and trade, exports remain weak. Progress on fiscal consolidation is slow, and deficits are high.”
MORE REPORTS