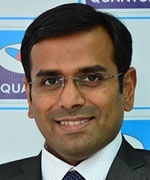 In a surprise move, Moody's Ratings upgraded India's sovereign bond rating from Baa3 to Baa2. (In common context, it has been upgraded from BBB(-) to BBB)

The last time Moody's upgraded India was in 2004 to Baa3, moving India to an 'Investment Grade Destination'. Ratings Below BBB(-)/ Baa3 are indicative of 'junk' status.

This should tell you that rating changes are very slow, infrequent and at most times move with a lag to market expectations.

The Indian government has been asking for a rating upgrade for many years now; including in 2013 when India suffered its second worst ever external account problem and was bracketed as part of the 'Fragile Five' [Turkey, Brazil, India, South Africa and Indonesia-Ed].

The rating change is a testament to a few things which have played out since 2012-13. The first is the government's commitment to fiscal consolidation. The Centre's Fiscal Deficit has been reduced from 6 per cent of GDP in 2012 to 3.5 per cent of GDP in 2017. The government also took steps to bring food inflation down. RBI's reforms on monetary policy by moving to inflation targeting, keeping positive real rates and boosting Forex Reserves has increased investor confidence and boosted macro stability.

The Moody's press release talks of other reforms like GST, bank recapitalisation and measure such as demonetisation and the use of Aadhaar for Direct Benefit Transfer in formalising the economy - as steps which will boost growth in the medium term and thus buffering the case for a rating upgrade.

They do caution though, on India's high Debt / GDP ratio, which is actually likely to increase in the next two years on account of slower growth and also problem areas which have been fixed by bond issuances like Uday Bonds (Power distribution), Farm Loan waivers (potentially to be funded by issuance of bonds); bank re-cap (to be funded by bank recap bonds).  So the actual fiscal deficit in India is larger than it seems in reported numbers.

This is why the rating upgrade now is surprising. Given the evident pressures on the fiscal front and the likelihood that the government may not even meet this year's and next year's fiscal target, the rating upgrade seems to have come at a wrong time.

Markets should worry that the government now having received the rating upgrade, may actually slacken and relax its commitment to reducing fiscal deficit, as per the stated plan.  Especially, at a time when investors seem to be worrying about the same as reflected in the increase in bond yields of more than 50 bps since August 2017.

The rating change though should reverse the negative sentiment in the bond markets for the time being. However, we do not expect a lot of foreign flows as bond limits to invest remains almost fully utilized and equities continue to remain over-valued. The Indian Rupee also thus will remain in the broad average range of ?64-67 to the US Dollar that we have seen for more than 2 years.

Bond yields remain over sold and attractive at around the 7 per cent mark but any large move down in bond yields would come through only on explicit clarity on the fiscal condition.

We broadly maintain our call given at the start of the year, that the best of the India bond markets are behind us but at that time bond yields were at 6.3 per cent. At the current yields, the risk / reward seem balanced but yet investors should continue to maintain lower return expectations from Indian bonds. We will revisit this call early next year when we get clarity on government's fiscal commitment.

(Disclaimer: The views expressed here in this article are for general information and reading purpose only and do not constitute any guidelines and recommendations on any course of action to be followed by the reader. The views are not meant to serve as a professional guide / investment advice / intended to be an offer or solicitation for the purchase or sale of any financial product or instrument. Information sourced from third parties cannot be guaranteed or was not independently verified. Whilst no action has been solicited based upon the information provided herein, due care has been taken to ensure that the facts are accurate and views given are fair and reasonable as on date.)