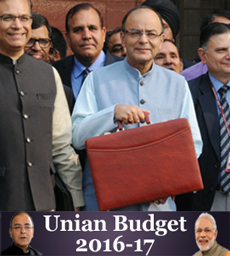 Finance minister Arun Jaitley unveiled a budget that proposes a wider distribution of economic benefits with increased focus on rural economy and digital infrastructure and draws resources from a wider front.

In a new rural shift in his pro-industry government, the finance minister announced aid and health programmes to ensure that the benefits of growth were more widely shared among India's 1.3 billion people.

"We have a shared responsibility to spend prudently and wisely for the people, especially for the poor and downtrodden," the finance minister said in his opening remarks.

The strategy shift, although guided by paucity of resources, could also boost his ruling party in upcoming state elections.

The Budget also focuses increasingly on agriculture and rural economy in general with a view to doubling rural income by 2022.

Jaitley said the government will lay greater emphasis on social sectors, education and skill development to boost jobs and for creation of a knowledge-based and productive economy.

He said despite a gloomy landscape, the Indian economy is expected to grow by 7.6 per cent in the current financial year (2015-16).

Besides, Jaitley proposed the enactment of a bankruptcy code for financial firms to be introduced in Parliament in 2016-17 and amendment of the RBI Act for implementing monetary policy framework.

To improve the finances of state-run banks, he said, the government plans to infuse Rs25,000 crore capital into these banks in 2016-17, adding that it will look for ways to find resources for additional capital for banks if required.

For the capital market, the finance minister proposed to raiase security transaction tax on options to 0.05 per cent.

He also proposed to levy an infrastructure cess of 1-4 per cent on certain models of cars and raise factory gate tax on various tobacco products by 10-15 per cent.

For the errant taxpayer, he proposed a limited compliance window on undeclared income of domestic tax payers as also a new dispute resolution scheme to resolve tax disputes.

At the same time, the finance minister also proposed to abolish 13 different levies being imposed by various ministries that yield revenues of less than Rs50 crore a year.