The GST Council, at its meeting in New Delhi on Tuesday, discussed a four-slab GST rate structure of 6, 12, 18 and 26 per cent, with a lower or nil tax on all on essential items and the highest rate on luxury goods. 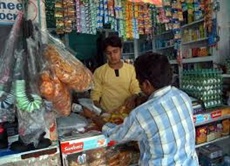 The GST Council, headed by finance minister Arun Jaitley also discussed a proposal sponsored by the central government to continue exempting food items from the tax as also to either keep 50 per cent of the commonly used goods out of the purview of GST or tax them at the lowest band.

The Council also discussed an additional levy on luxury items along with a higher GST slab. Government hopes to keep inflation under check with the central government's proposal to continue the current tax exemption for food and other exempted essential goods and services.

It is also proposed to keep 50 per cent of the common use goods in either exempt category or on the lower GST band.

About 70 per cent of the items are proposed to be under the 18 per cent GST rate while ultra-luxury items like high-end cars and demerit goods like tobacco, cigarettes, aerated drinks, luxury car and polluting items would attract a GST rate of 26 per cent, and an additional cess on top of the GST rate.

The Council discussed a 4-per cent GST rate on gold in view of the industry demand to exempt gold jewellery from GST or keep rate at the minimum. FMCG and consumer durable products would attract 26 per cent GST rate, but this would also be far lower than the current incidence of around 31 per cent.

The GST Council at its three-day meet also reached consensus on the formula for payment of compensation to states from any loss of revenue from implementation of Goods and Service Tax (GST) in the first five years beginning 1 April 2017.

States getting lower revenue than this would be compensated by the Centre.

The finance minister said the GST Council discussed five alternatives of GST rate structure, adding that no decision was taken and discussions would continue on Wednesday as well.

He said the cess on luxury and non-essential items would be used to create a Rs50,000 crore fund to compensate states for loss of revenue. The centre, however, was not inclined to include state tax breaks to calculate GST compensation, state officials said.

"The principles of fixing the rate would be inflation neutral, and also that while the states and the centre continue with their expenditure tax payers are not burdened," Jaitley said.

Jaitley said the Council has considered a 14-per cent revenue growth rate for calculation of compensation, while it discussed at least five options. These included nominal GDP growth rate, or best three years of state revenue growth from previous five years, or average of three years.

It was also discussed to consider average of previous five years or look into the revenue growth after excluding the outliers in the past five years.

"The range of revenue growth based on all these formulations came between 10-18 per cent... It was then decided that one middle path be adopted which will be 14 per cent," Jaitley said.

Explaining the rate structure proposed by the centre, revenue secretary Hasmukh Adhia said taxation of services would, however, be only in the 6 per cent, 12 per cent and 18 per cent levels with the higher rate at 18 per cent.

"So far between the last two meetings and today, we have been one by one reaching a consensus on each issue and so far all decision have been taken by a consensus.

"And the object is to keep on discussing and re discussing even when there are no agreement on the first instance and take as many decision possible by consensus and to the extent possible avoid a situation where we have to put an issue to vote. So far we have achieved that objective," he said.

Once the rate structure is finalised, the technical group of state and central tax officials will discuss which item would fall in which tax bracket.