Jharkhand Mukti Morcha (JMM) chief Hemant Soren is all set to be chief minister of Jharkhand after a successful challenge to incumbant Bhartiya Janata Party (BJP) in an the election to the state assembly that saw regional and communal issues trump national issues. 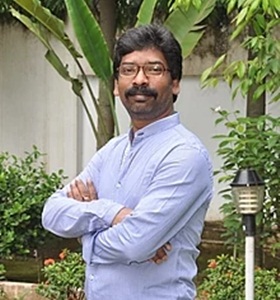 BJP’s strength in the state assembly now stands reduced from 37 in the last assembly polls to merely 25 as Narendra Modi’s popularity failed to make amends for chief minister Raghubar Das’s failure to assess public sentiment.
Das conceded defeat in the Jharkhand assembly elections on Monday as he lost not just the chief minister's chair but also his MLA seat, while an opposition alliance won the polls.
Das himself admitted on Monday that it was his defeat, not of the BJP. “It is not BJP’s defeat, it is my defeat,” Das told reporters at a press conference here. Das resigned after the BJP received a drubbing in the assembly elections. “I met Governor Droupadi Murmu and submitted my resignation. The governor asked me to be caretaker CM till the new government is formed”, Das told reporters after coming out of the Raj Bhavan here.
Das lost to Independent candidate Saryu Roy by over 15,000 votes in East Jamshedpur constituency.
Whatever may the factors behind BJP’s losses, the fact remains that Raghubar Das, the first non-Adivasi chief minister of the state, could not lead the BJP to another victory.
The Jharkhand Mukti Morcha-Congress-Rashtriya Janata Dal alliance managed to secure a clear majority with 47 of the 81 assembly seats, while the BJP retained 25 seats and its former alliance partner AJSU secured 2 seats. The Jharkhad Vikas Morcha secured 3 seats while other parties won 4 seats.
The Babulal Marandi-led Jharkhand Vikas Morcha (Prajatantrik) too, which at one point looked poised to become a kingmaker and had, therefore, stopped negotiations with the larger opposition alliance finished a poor third. It had won 11 seats in 2014 but ended up with only three in these state polls.
Jharkhand Mukti Morcha (JMM) leader Hemant Soren has won both the Barhait seat and the Dumka seat. Talking to reporters in Ranchi, Soren  thanked voters for giving a clear mandate to the JMM-led alliance which includes the Congress and RJD.  Soren, who is the Mahagathbandhan’s CM face, had served as the fifth chief minister of Jharkhand between July 2013 and December 2014.
As per the seat-sharing agreement, the Jharkhand Mukti Morcha (JMM) contested 43 seats while the Congress contested 31 seats and the Rashtriya Janata Dal (RJD) seven seats.
The BJP concentrated on publicising the Centre’s welfare schemes and its campaign on the Ram temple, Article 370, the issue of illegal immigrants, the National Register of Citizens, and so on, while the real issue for the tribal majority state was land rights.
Das rubbed tribal sentiments the wrong way by amending land laws - the Santhal Pargana Tenancy (SPT) Act and the Chotanagpur Tenancy Act (CNT) - in 2016. The amendment was passed in the assembly without discussion amid the opposition uproar.
Several memorandums were submitted to the governor urging him not to accede the amendments. The amendments were proposed to acquire land for development projects.
Both laws had been formulated to protect the tribals’ lands. Jharkhand witnessed state-wide protests over the issue. Das took all steps to suppress the movement. The protesters were denied buses and the police were instructed to stop them from entering Ranchi.
The entire opposition, particularly the Jharkhand Mukti Morcha (JMM), protested inside and outside the assembly against the amendments.
At the assembly poll campaign, the JMM-Congress-RJD combine`s chief ministerial candidate Hemant Soren, himself a tribal, assured to protect water, forest and land (jal, jungle and jameen) rights of the tribals.
The tribals - there are nine tribes in the state - worship the nature and are emotionally attached with their culture, tradition and forest.
The tribals have been demanding the Sarna code to protect their culture and the population. The JMM has promised to protect the land, culture and tradition of tribals, but will it bring the Sarna code is to be seen.
The BJP seems to have paid the price for experimenting with a non-tribal as the chief minister of Jharkhand, where tribals have a sizable population.
Jharkhand was created in November 2000 for the welfare of the people of the region, particularly tribals who constitute around 27 per cent of the state`s population. Respecting the tribal population`s sentiment, the BJP named Babulal Marandi, a tribal, as the first chief minister.
Marandi was later replaced by another tribal leader Arjun Munda.
But after getting a majority in alliance with the All Jharkhand Students Union (AJSU) in 2014, the BJP elevated Raghubar Das as the first non-tribal chief minister.
MORE REPORTS