In a surprise move Sadhvi Pragya Singh Thakur, who was illegally confined to jail by the UPA government accusing her of religious terrorism, today formally joined the Bharatiya Janata Party to contest the Lok sabha election from Bhopal where the opposition Congress has fielded its veteran Digvijaya Singh. 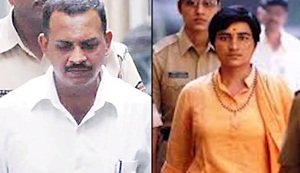 "I have formally joined BJP, I will contest elections and will win also," Thakur said after joining the party.
Thakur, who is out on bail, had joined the BJP only hours before her name was announced as its candidate, underscoring the BJP’s attempt to bring the Hindutva plank at the centre stage of polls in the high profile constituency.
While Thakur was an accused in the 2008 Malegaon blasts before being released last year after the NIA said it had no prosecutable evidence against her, she is seen as a “deep saffron” figure.
On 2 December 2017, a special NIA court had dropped stringent Maharashtra Control of Organised Crime Act charges against Lieutenant Colonel Prasad Purohit, Sadhvi Pragya, Sameer Kulkarni and other accused in the blast case.
Six persons were killed and 101 were injured when an improvised explosive device strapped on a motorcycle went off at Malegaon on 29 September 2008.
For BJP, she can be considered as a good pick against Singh, who had called the 2008 Batla House encounter of Indian Mujahideen terrorists fake.
Immediately after her name was announced as BJP candidate from Bhopal, Sadhvi Pragya told mediapersons that she is ready for the electoral battle ahead. "I have already begun my work. We are absolutely ready."
Sadhvi Pragya had also highlighted that she is a local of Bhopal and connects with the people here as she has been in the city since she was 16-year-old.
Speaking to Zee News previously, Sadhvi Pragya had said that she does not consider Digvijaya as a serious opponent and if she is chosen to fight him, it would be her honour. "I am a nationalist while he speaks against the nation," she had said.
Also, Conrgess has not won from Bhopal since 1989. In 2014, the seat was won by Alok Sanjar of BJP with a margin of 3.7 lakh votes.
MORE REPORTS