Trinamool Congress supremo and West Bengal chief minister Mamata Banerjee took her showdown against the Narendra Modi-led government at the centre a step further by arresting a team of officers of the Central Bureau of Investigation (CBI) probing the Sharda Chit Fund scam. 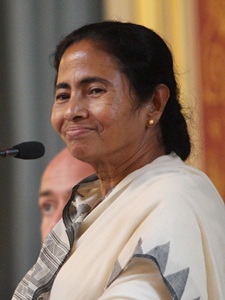 A day after the Central Bureau of Investigation (CBI) claimed that Kumar had been "absconding" and "being looked for" in connection with Saradha and Rose Valley ponzi scam cases, a CBI team landed at the city police chief's residence.
A team of Kolkata Police personnel soon rushed to the spot and tried to enquire if the CBI team had the documents required for questioning Kumar.
Later on, a small team of CBI officials was taken to Shakespeare Sarani police station for further questioning. Thereafter, more policemen arrived at the spot and a commotion ensued. Some CBI officers were then forcibly bundled into police jeeps and taken to the police station.
Minutes after Kolkata police detained CBI officers outside police commissioner Rajeev Kumar's residence, West Bengal chief minister Mamata Banejee rushed to Loudon Street and announced that she would sit on a dharna from Sunday evening against the "Gabbar style" attitude of the central investigating agency and the Modi-led government.
Banerjee arrived at Kumar’s house around 7 PM. Soon, top police officers, including all the divisional DCs, ADG, Law and Order, Anuj Sharma, DGP Virender rushed and conducted a high level meeting.
"Whatever happened today is worse than emergency. It was no less than a coup. CBI is harassing in Gabbar style (a reference to iconic bandit in the movie, Sholay)," she said.
According to her, NSA chief Ajit Doval was "giving instructions" to CBI and PM Modi to take action against TMC leaders and policemen.
"There are companies (chit fund) that are sponsored by PM Modi, Assam CM and BJP MP Babul Supriyo. Why they are roaming freely? Why haven't they been arrested. I will stick to my stand that Kolkata police commissioner is one of best officers in the world. Modi doesn't deserve to be a prime minister. Let them prove that Rajeev Kumar was involved in chit fund scam," Mamata said.
The Trinamool Congress chief further said that it was her duty to protect her officers. "CBI came to Rajeev Kumar's house without a search warrant. How audacious it was? They are playing with the Constitution. I will not tolerate this," she said, while adding that she will sit on a dharna from Sunday evening at Esplanade.
The entire area around Kumar's residence and the family quarters of IPS and IAS turned into a fortress.
Meanwhile, a large team of policemen rushed to CBI office at Salt Lake and took their positions in front of CBI joint director's house in Kolkata.
On the other hand, BJP leaders Kailash Vijayvargiya and Mukul Roy left for Delhi amidst reports that CBI has contacted union home ministry officials and West Bengal governor Keshari Nath Tripathi over the issue.
The showdown led to a war of words between the BJP leaders and opposition. While TMC MP Derek O'Brien questioned if it was a "constitutional coup", UP CM Yogi called upon saffron party workers to fight against TMC's "hooliganism" in a "democratic manner".
Banerjee received support from several leaders of the anti-Modi bloc, including Arvind Kejriwal, Akhilesh Yadav, MK Stalin, Sharad Pawar and HD Deve Gowda.
Congress president Rahul Gandhi lent support saying the entire opposition will stand together and "defeat the fascist forces".
Mamata’s move follows the withdrawal of general consent to the CBI to exercise jurisdiction within West Bengal territory, which applies prospectively in West Bengal and Andhra Pradesh, both of which withdrew consent last year.
The withdrawal of general consent means CBI officers lose police powers under the Criminal Procedure Code in the State concerned and for registering a case. “The case should be allowed to reach its logical conclusion… notwithstanding the withdrawal of consent during pendency of investigation,” the Supreme Court had held in the Dorji case, which dealt with a notification issued by the Sikkim government withdrawing consent to the CBI to probe a corruption case against the then chief minister.
In 1961, the Supreme Court in the Major E.G. Barsay judgment held that “no member of the Establishment (CBI) can exercise powers and jurisdiction in any area in a state without the consent of the government of that state”.
The act of withdrawal of consent can be judicially reviewed. Besides, withdrawal of consent is no bar for a court to order a CBI probe.
MORE REPORTS