Mehbooba Mufti has resigned as Jammu and Kashmir chief minister as the Bharatiya Janata Party (BJP) called off an alliance with her People Democratic Party (PDP) amidst increasing radicalisation of Kashmitri youth. 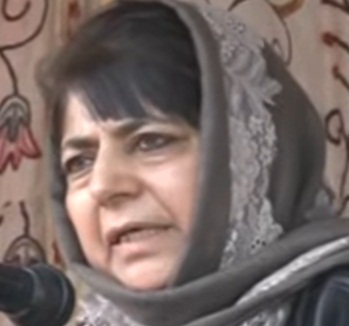 Mehbooba submitted her resignation letter to governor N N Vohra shortly after the BJP announced it was pulling out of its alliance with the PDP in Jammu and Kashmir.
"It has become untenable for the BJP to continue its alliance government in Jammu and Kashmir, hence we are withdrawing" BJP general secretary Ram Madhav said at a press conference in the afternoon.
"Terrorism, violence and radicalisation have risen and fundamental rights of the citizens are under danger in the Valley. Shujaat Bukhari's killing is an example" the BJP leader added.
Ram Madhav announced the decision after BJP’s J&K lawmakers had a meeting with Amit Shah in Delhi.
“Restoring peace in Kashmir and encouraging fast development in Jammu and Kashmir, these were the objectives with which we joined with the PDP,” Madhav said at a press conference. “We have taken a decision, it is untenable for BJP to continue in alliance with PDP in Jammu and Kashmir, hence we are withdrawing.”
Madhav also said that the BJP will be pushing for governor’s rule in the state, as it feels like the Mehbooba Mufti government has let down the people. “Keeping national interest in mind and that Kashmir is an integral part of India, we have to say it is time that the reins of power in the state be handed over to the governor,” he said.
“We are not questioning the intention of the government but it has failed to achieve the intended objectives in Kashmir valley. We even appointed an interlocutor for the state to talk with all the stakeholders. The Central government has done whatever the state government sought.”
“Terrorism and radicalisation is on the rise in the state. The murder of editor Shujaat Bukhari shows even press freedom is in danger,” Madhav continued.
“I am not shocked. We didn't do this alliance for power. This alliance had a bigger motive - unilateral ceasefire, PM's visit to Pakistan, withdrawal of cases against 11,000 youth: tweeted Mehbooba Mufti.
“Dialogue and reconciliation was the main agenda behind the BJP-PDP alliance,” she said.
“Have submitted my resigntion to the governor and have asserted that we do not want any other alliance,” she added.
“This is a surprise for us because we did not have any indication about their decision,” ANI quoted PDP spokesperson Rafi Ahmad Mir as saying.
Congress leader and leader of the opposition in the Rajya Sabha Ghulam Nabi Azad said the breakup of the alliance was good for the people.
“Whatever has happened is good. People of J&K will get some relief. They (BJP) ruined Kashmir & have now pulled out, maximum number of civilian and army men died during these three years,” Azad said, even as he said Congress won’t seek an alliance in the state.
The PDP holds 28 seats in the Jammu and Kashmir assembly, and BJP has 25 in the 87-member house.
The two parties have had several differences in the recent past, the latest being over the extension of the ceasefire announced during Ramzan. Mehbooba had asked for an extension of the ceasefire, and the state BJP had said that it did not support the idea.
The month-long ceasefire in the valley witnessed a spurt in terror strikes. Noted journalist Shujaat Bukhari and Army jawan Aurangzeb were killed in separate attacks on the eve of Eid.
Differences between the BJP and PDP had also boiled over when BJP MLAs joined a rally in support of the accused in the gangrape and murder of an eight-year-old girl in Jammu’s Kathua.
The parties have differences on holding talks with separatists and removal of the Armed Forces (Special Powers) Act.
MORE REPORTS