Centre may go beyond Pay Commission to give massive hikes

The Narendra Modi government is considering increasing the salary of low-level officials from matrix level 1 to 5 even beyond the recommendations of the 7th Pay Commission, reports on Tuesday said. 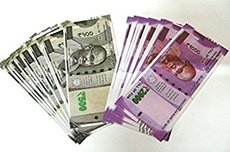 The official announcement regarding the hike is expected around April, at the beginning of the new financial year.

The basic pay of Central government employees was last increased on 1 January 2016, when their salaries saw to a hike of Rs11,000 from Rs7,000 to Rs18,000 per month based on the fitment factor of 2.57. However, the employees had demanded that their pay be increased to Rs26,000.

But even if the new hike is approved, the government will not pay any arrears on pay hike to the employees.

Finance minister Arun Jaitley had also assured the central government employees in 2017 that they will get a hike in the near future.

Reports had earlier said that Justice A K Mathur, chairman of the 7th Pay Commission, had recommended that rather than forming new pay commissions at long intervals, the Central government should review the salary of government employees every year.

The government reportedly plans to send the proposal to the Cabinet at the start of the next financial year.

Initially, the 7th Pay Commission report had recommended a basic salary of Rs18,000 but that led to protests from the government employees who demanded it to raise further to Rs26,000.

Based on the report of Committee on Allowances (CoA) and the recommendation of E-CoS, the Cabinet had approved the modifications in 34 allowances in its meeting held on 28 June 2017. All allowances are given effect from 1 July 2017. It will benefit 34 lakh civilian employees and 14 lakh defence personnel.