More than 2.82 lakh fair price shops out of a total 5.27 lakh FPSs have been automated allowing distribution of foodgrains to NSFA beneficiaries with the help of PoS devices as the website www.annavitran.nichas been made functional.

The new portal can be used to monitor the electronic transactions happening at the fair price shops for the distribution of foodgrains to NSFA beneficiaries in the various states a nd union territories.

The use of electronic point of sale (ePoS) devices at FPSs will help in the authentication of beneficiaries and in electronic recording of subsidised foodgrain distribution to beneficiaries, an official release said.

As compared to earlier practice of manual record-keeping of the transactions, the ePoS based transactions have the advantage that the FPS dealers are not required to manually make separate/repetitive entries of foodgrain distribution in registers and ration cards of the beneficiaries.

Connectivity to ePoS devices at FPSs is ensured by State/UT governments. In the absence of any connectivity when ePoS devices can also work in offline mode, allowing for uninterrupted use.

Maharashtra has the largest number of ePoS-equipped fair price shops  of 51,079, followed by Tamil Nadu 34,773 and Andhra Pradesh 28,663, which has achieved 100 per cent automation in fair price shops. 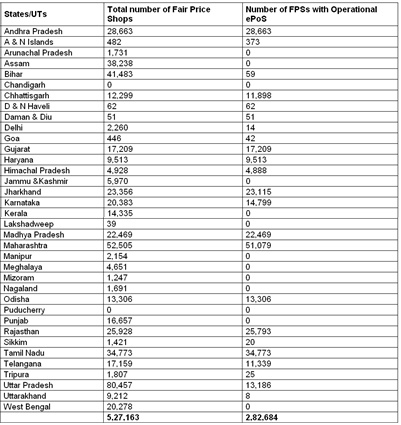 Minister of state for consumer affairs and food and public distribution C.R. Chaudhary gave the information in Rajya Sabha on Friday.