As the cycle of violence in Kashmir that has left 40 protesters and two policemen dead shows little sign of ending, authorities have officially confirmed that newspaper owners were asked not to publish newspapers till 19 July. 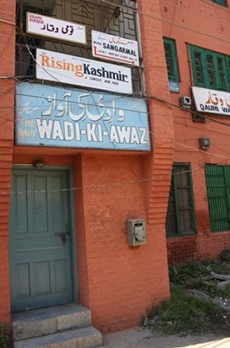 Local newspapers in the curfew-bound state failed to hit the stands on Monday for the third consecutive day after the government's clampdown on the media in the aftermath of widespread protests in the Valley.

The official curfew and a shutdown called by the separatists paralysed normal life for the 11th consecutive day in the Valley on Monday.

Officials told IANS that Sunday was the first day without any civilian casualty since the violence engulfed the Valley on 9 July following the killing of self-styled Hizbul commander Burhan Wani in a gunfight with the security forces on 8 July.

"A violent mob attacked a camp of the Rashtriya Rifles in Saderkot area of Bandipora district yesterday (Sunday) forcing the soldiers to open fire in self-defence. Four protesters were injured in the incident."

"Except for stray incidents of stone pelting at some places, the overall law and order situation remained calm yesterday (Sunday) across the Valley," a senior police officer told IANS.

Cable television services have however been resumed after service providers took off all Pakistan TV channels and two private Indian channels.

All mobile phone services including internet and call facilities have been snapped across the Valley.

All schools, colleges and universities have been closed till 24 July. All job interviews by the state Public Service Commission (PSC) have also been postponed.

Closure of the strategic Jammu-Srinagar National Highway for over a week has caused shortage of essential items in the Valley.

All supplies of essentials of life are routed into the landlocked Valley through this highway.

Train services between Baramulla town in the Valley and Bannihal town in the Jammu region also remained suspended for the 11th day on Monday.

Separatist leaders continue to remain under house arrest and preventive detention in the summer capital Srinagar.

The centre has rushed another 20 companies of paramilitary forces to assist the state government in maintaining law and order in the trouble-torn Valley.