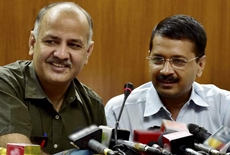 In his budget speech, Sisodia said his taxation proposals were founded on four principles - maintaining the distributive character of Delhi's trade, simplification of the existing system and promoting ease of doing business, simplifying the structure to avoid manipulation and keeping a uniform rate with neighbouring states.

While the government initiated the demolition of south Delhi's BRT corridor built by the erstwhile Congress administration, Sisodia announced that the government will construct two elevated BRT (bus and rail transport) corridors for east-west and north-south connectivity.

The education sector once again received majority of the funds in this year's budget, with Sisodia proposing a total expenditure of Rs10,690 crore. This is 22.55 per cent of the total budget and an increase of 8.68 per cent from last year.

While the previous budget focused on development of quality infrastructure, improvement in quality of learning is the main focus area this year. For this, the government has given a boost to skill development and teacher training.

Reiterating its focus on healthcare and ensuring that medical facilities are easily accessible to all, the Delhi government has allocated Rs5,259 crore to the sector in the 2016-17 budget. This marks a jump of nearly 10 per cent from last year.

The three-tier strategy adopted by the government focuses on setting up 1,000 mohalla clinics and 150 polyclinics across the capital in the next one year - a move aimed at bringing primary healthcare to the ''doorstep of citizens''.

Two weeks before the second phase of its flagship odd-even scheme kicks off, the AAP government allocated a major portion of budget funds to transport and road infrastructure, to encourage measures to curb pollution in Delhi and decongest its roads.