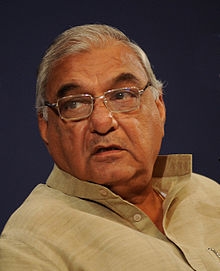 Former Haryana chief minister Bhupinder Singh Hooda was on Tuesday night asked to leave Rohtak, the town worst hit by Jat violence, by the district administration, which cited maintenance of peace as the reason for the order.

Hooda, a Congress leader, has been asked to leave Rohtak "to ensure peace and harmony", official sources said.

Hooda told PTI that he had received the order advising him to leave Rohtak and not stay there for the night by the district administration for maintenance of law and order.

"As a law abiding citizen I complied with the directions issued by the Principal Secretary A K Singh and left the town immediately," he said, adding he was on his way to Delhi.

Asked whether the administration could issue such a direction, he said it could do so keeping law and order in mind.

Batra said that later an order was issued by principal secretary A K Singh, who has been appointed the special officer for Rohtak during the Jat agitation.

He issued the order on ground of maintenance of law and order. The former chief minister immediately complied with the order and left for Delhi, Batra said.

Hooda also faced an angry crowd of traders in Rohtak who suffered heavy losses in the incidents of violence and arson.

Hooda, accompanied by senior Haryana Congress leader B B Batra, came out of his car to express sympathy with the traders but was gheraoed by them.

Later a person hurled a shoe at Hooda, who by that time had entered his car. The shoe fell short of his car.