North Indian states are likely to incur a loss of Rs34,000 crore to the economic activity due to Jat agitation, the PHD Chamber has said, observing that prices of essential commodities may rise due to supply constraints. 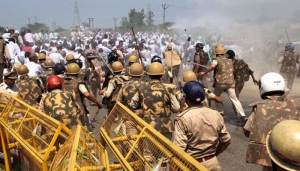 "There is a huge loss of the economic activity not only in the state of Haryana but across the Northern states of India. As supply of the essential items has been severely impacted, we cannot rule out the impact on inflation.

"Based on inputs received from various industry stakeholders, we estimate that these states may face Rs34,000 crore loss of economic activity due to Jat agitation during the last few days," PHD Chamber president Mahesh Gupta said.

Disruption in transportation modes including railways, roads, passenger vehicles, goods vehicles, drop down in tourists arrivals, loss in financial services, hit to the industrial sector including manufacturing, electricity, and construction may result in a huge loss in the GSDP of states for the last quarter of FY15-16, said Gupta (See: Rail, roadways suffer huge losses due to Jat stir).

Moreover, it said, the damage to infrastructure including damage to roads, restaurants, bus stands, railway stations, among others may result in Rs4,000 crore, leading to overall loss of Rs34,000 crore.

The anticipated loss has been calculated for the northern states including Haryana, Punjab, Delhi, Chandigarh, Rajasthan, Uttarakhand, Uttar Pradesh, Jammu and Kashmir and Himachal Pradesh.

All these states contribute around 32 per cent towards India's Gross State Domestic Product (GSDP).

"We believe northern states would take measures for the smooth functioning of the economic activity and restore essential services in their respective territories," Gupta said.