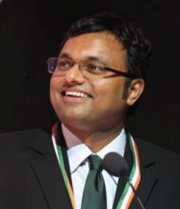 The Enforcement Directorate (ED) on Wednesday searched the office of Karti Chidambaram, son of former finance minister P Chidambaram, in connection with its probe against firms owned by his friends.

Karti Chidambaram held a press conference soon after the ED raid and clarified that neither he nor his family members were shareholders of the firms linked to the case due to which the raids were conducted.

''I was informed that they are investigating three firms. Two of the firms belong to my friends. They are owned by professionals and managed by competent board of directors. I am not aware of the third firm,'' Karti said in a statement.

Officials said they searched a room they had locked in the office premises of Karti Chidambaram as part of their operation that was executed on 1 December. ''Some documents have been seized,'' they said.

Officials said the room could not be opened on 1 December and was sealed. It was opened on Wednesday and Karti was informed accordingly, they said.

Karti, in his statement, reiterated he had no ''economic interests'' in the firms being investigated by the probe agencies and expressed surprise over the action conducted on Wednesday.

''I made it clear to the officers what I had publicly stated earlier. Neither I nor any member of my family is a shareholder or director of any of the said firms. We do not have any economic interests in the said firms,'' he said.

Reacting to ED's action, P Chidamabram said as could be expected, nothing was found in the fishing and roving enquiry.

''I would like to see how far a foolish government would go in harassing him. I still believe that the departments I left behind have many officers who will act according to the law and their conscience,'' he said.