Congress would have avoided drubbing with Pranab as PM: Khurshid

The selection of Manmohan Singh selection over Pranab Mukherjee in 2004 to head the United Progressive Alliance government came as a surprise not only to the Congress but also to outsiders and many argue the party might have averted the 2014 Lok Sabha drubbing if the choice had been the other way around, says former union minister Salman Khurshid. 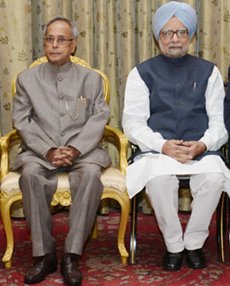 ''It's always easy to be wise after the worst has happened. We must not forget the whole nation had applauded Dr Manmohan Singh as the game-changer finance minister during the Narasimha Rao regime (June 1991 to May 1996). But when Dr Singh contested the 1999 Lok Sabha polls from what was thought to be the safest seat in the country for him, South Delhi, he was defeated by a candidate whose name many would scarce recall (it was Professor Vijay Kumar Malhotra of the BJP),'' writes Khurshid in his new book The Other Side of the Mountain which he describes as a concise biography not of one person but of the many who were part of the UPA.

However, the former external affairs minister says that after some initial reluctance, not only was Sonia Gandhi's decision to choose Singh to lead the UPA widely welcomed but was ''also proved correct by the electoral verdict five years later, when we were returned to power with a greater majority''.

Khurshid, who had served as external affairs minister in UPA-II, says he was lucky to have the confidence of the incumbent prime minister, though Singh once ''gently chastised'' him for a comment made before the media indicating India could not provide lethal weapons to Afghanistan.

''As external affairs minister, I had a pretty free run on most matters, with the prime minister taking special interest in the neighbourhood, our rediscovery of America, the millennium conversation with China and the excitement of keeping pace with Japan.

''I recall just once when Dr Singh gently chastised me for a press comment indicating we could not provide lethal weapons to Afghanistan. It came in the wake of repeated prodding by (Afghan) President Hamid Karzai, although he never did make an issue of it,'' Khurshid says.

Khurshid felt there was ''no harm in being candid about our principled position from which there was no likelihood of departure. This was despite the fact that military personnel had told me we had innumerable tanks in reserve that were unlikely to be used by the army again, which could be refurbished without great expense''.

''The soft-spoken prime minister advised me: 'President Karzai is a suspicious man. You have to be careful as the foreign minister'. I mumbled and left the matter there, quite certain some busybody had carried the tale to the prime minister and he felt obliged to flag it,'' writes Khurshid.

The book began to take shape soon after the results of the 2014 Lok Sabha elections were announced on 16 May and ''we – the ministers in the UPA – returned to New Delhi from the electoral battlefields spread across the country as though we were phantoms in a twilight zone''.

He says the then ministers were in substance, vanquished and repudiated warriors.

''We were the past and it only remained to become 'shadows of the past'. Such was the sombre mood in the Congress then,'' he says.

He also feels Congress is in the midst of a very serious existential crisis.

''Some people label it as 'leadership in crisis'; others believe it is about political content that the country has outgrown; and yet others have the stock explanation of being out of touch with the grassroots.''

According to Khurshid, both Sonia and Rahul Gandhi are, however, popularly endorsed and elected leaders of the Congress and there is no one even remotely equipped to provide alternative leadership.

He says through his book, he would like to set the record straight because the truth must prevail over the widespread falsehood spread over the past few years.

Allegations of scams like the 2G spectrum, the 2010 Commonwealth Games and Coalgate considerably tainted the UPA's image.

''But in all the charges that were made and investigated by various law-enforcement agencies, there was not a whisper of money changing hands or any disproportionate assets found in the possession of the accused politician or the civil servant accused of misdemeanour or a similar offence.

''Simply because a decision was wrong or would have been taken differently by another person was enough to trigger a presumption of illegality and corruption,'' he says.