A secret meeting in Bangkok between the National Security Advisors of India and Pakistan, which marked a dramatic upturn in ties, has sparked a political row. 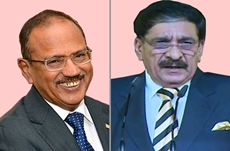 In Parliament, the Congress has demanded a statement from Prime Minister Narendra Modi on the National Security Advisor (NSA) talks on Sunday and their outcome.

"Parliament should have been informed and still should be informed regarding the whole matter," Congress parliamentarian and former external affairs minister Anand Sharma said today, adding that the government's decision to hold NSA level talks was disrespect to Parliament.

Union minister Mukhtar Abbas Naqvi said foreign minister Sushma Swaraj would make a statement on Thursday. Swaraj will travel to Pakistan on Tuesday for the Heart of Asia conference on Afghanistan, the foreign ministry has said. Sources say she is likely to hold talks with her Pakistani counterpart Sartaj Aziz.

Opposition parties like the Congress have called the meeting a betrayal.

"It's a grand betrayal. It's a betrayal of everything that this government has ostensibly, publicly espoused," Congress leader Manish Tewari said.

"Why is it so secret? There are so many flip flops regarding talks," said Saugata Roy of the Trinamool Congress.

The Bangkok meeting was green-flagged by Prime Minister Narendra Modi and his Pakistani counterpart Nawaz Sharif when they met and chatted in Paris two weeks ago.

In a four-hour meeting, the two National Security Advisers (NSAs) held discussions on security, terrorism and Jammu and Kashmir.

Reports quoting officials familiar with the meeting said NSA Ajit Doval called on Pakistani counterpart Nasir Khan Janjua to take steps to rein in operations by anti-India organisations like the Lashkar-e-Taiba and Jaish-e-Mohammad, both of which have stepped up operations in Jammu and Kashmir.

Sources say PM Modi took initiative on the NSA meeting, which was one of the decisions taken when he met Sharif in Ufa, Russia. The talks, they say, could lay the groundwork for PM Modi's visit to Pakistan next year for the SAARC summit.

Earlier this year, the NSA talks fell through at the last minute with India objecting strongly to a proposed meeting between Pakistan's then Security Advisor Sartaj Aziz and Kashmiri separatists. There were disagreements about the agenda of the meeting too - with Pakistan pushing for an "open agenda" and India maintaining the talks should be confined to terrorism.