India's most-talked about election this year has now delivered what many say is a historic verdict. 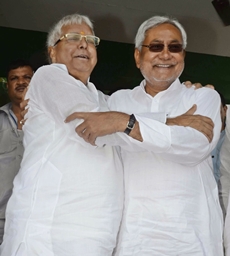 The 'Grand Alliance' of Chief Minister Nitish Kumar's Janata Dal (United) , former Chief Minister Laloo Prasad Yadav's Rashtriya Janata Dal, and the Congress won as many as 178 of the 243 assembly seats, leaving the BJP and its allies with a mere 58. Others including the leftists won the remaining seven seats.

Bihar's voters can be fiendishly difficult to fathom - economic aspirations are often leavened with loyalties of caste and religion. As a result, none of the exit polls got anywhere near predicting the poll outcome.

Bihar is Modi's second consecutive setback this year after he swept to power with an overwhelming majority in 2014.

In February, an upstart anti-corruption party scorned by the prime minister routed his party in Delhi. Now an untidy "grand alliance" comprising an alphabet soup of local parties have felled the BJP and its charismatic leader in Bihar.

The defeat is seen as a direct rejection of Prime Minister Modi, who was the indisputable face of his party's campaign in Bihar. He led the campaign, addressing 26 public meetings across the length and breadth of the state.

What's more, his trusted aide Amit Shah, who is also the BJP president and chief poll strategist, camped in the state and spoke himself at more than 70 meetings.

Modi came to Bihar promising jobs and development in a reprise of the campaign, which helped him to sweep to power in federal elections last year.  His party and its allies had won 31 of the 49 parliamentary seats in Bihar in 2014.

But the prime minister's lustre has somewhat diminished since. In what was a protracted five-phase election, his party's campaign ramped up the rhetoric, asking voters, among other things, if they wanted "a [Bihar] government  that protects terrorists".

Amid growing countrywide concern over rising intolerance and Hindu hardliners running amok, Modi and Shah raised the sensitive issue of cow slaughter and consumption of beef.

They invoked Pakistan and accused his rivals of stealing affirmative action quotas for minorities. Things became so bad that the election authorities stepped in and proscribed two provocative BJP campaign adverts.

Shah told a rally that if "by any chance" his party lost Bihar, "then firecrackers would be let off in celebration in Pakistan". Kumar met the BJP's high-pitched campaign with a measured response, addressing concerns over equitable growth and development. Meanwhile his ally, Yadav mined the caste vote successfully, making sure that not many voters strayed to the BJP.

Modi and his party, say analysts, have a lot of lessons to learn from the Bihar verdict.

First, running a campaign that mixes development, caste and religion does not always work. Voters should be more respected for their wisdom.

Secondly, voters appear to be increasingly sceptical of Modi's promises of growth and development. Many believe the Bihar verdict shows he hasn't convinced many people that he has the ability to deliver on his key promise.

Even some of his most ardent supporters say Modi has run a lacklustre and underwhelming government in the past 18 months. The tyranny of expectations is beginning to bite. The needless provocations of some of his noisy lawmakers and ministers and the radical fringe are giving his government a bad name at home and abroad.

Thirdly, Modi is seen as a less invincible and strong leader. The rout in Delhi shattered the aura of invincibility. The Bihar debacle proves that the enthusiasm has waned further. Many are wondering how a prime minister with one of the largest poll victories in India's history is unable to rein in hardliners in his own flock.

Finally, the BJP should now be ready to face a reinvigorated opposition - in tatters after last year's debacle.

The fact that the BJP could not take on a motley coalition in which one of the leaders, Mr Yadav, was convicted in a corruption case and has been effectively barred from holding office until 2024, points to the BJP's lack of political imagination and accommodation.