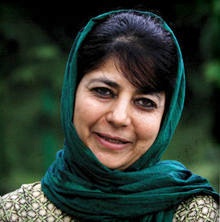 Mehbooba Mufti, president of the People's Democratic Party (PDP), which is BJP's partner in the Jammu and Kashmir ruling alliance, is expected to join the union council of ministers when Prime Minister Narendra Modi expands his ministry next week.

Modi is also expected to promote three ministers of state to cabinet ministers and drop minority affairs minister Najma Heptullah, who is likely to be made the governor of a state.

Minister of state in the finance ministry Jayanth Sinha may be given additional charge of corporate affairs.

Besides, Modi will induct a representative from the Shiv Sena, the BJP's coalition partner in Maharashtra, sources said. Shiv Sena nominee Anil Desai, who was earlier left out of the cabinet during the previous reshuffle and expansion, may be made an MoS with independent charge, they add.

Mehbooba Mufti is expected to join the Modi cabinet, which sources said may be expanded on 8 April. The BJP is currently holding its annual National Executive meeting in Bangalore.

The cabinet reshuffle is expected to take place a day before the prime minister embarks on a three-nation tour.

At present, the Modi government has total 26 cabinet ministers and 39 ministers of state. During the previous expansion, Modi had inducted 21 new faces.