The adviser to Pakistan Prime Minister Nawaz Sharif on national security and foreign affairs, Sartaj Aziz, said on Tuesday that Islamabad would respond positively to New Delhi if it desired to resume peace talks, but such an initiative should be based on equality and mutual respect. 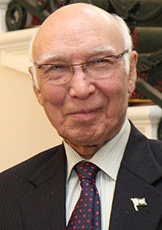 ''India cancelled the scheduled meeting between the two foreign secretaries, so it is obligatory that India should resume the dialogue process,'' Sartaj Aziz said in an informal chat with journalists after inaugurating the annual conference of Pakistan Institute of Development Economics in Islamabad.

Ruling out the possibility of an immediate breakthrough, the adviser told a questioner that Pakistan did not expect any breakthrough on resumption of a bilateral dialogue with India while the Modi administration was in charge of affairs.

He, however, said Pakistan was always ready to resume the dialogue with India to resolve all outstanding issues, including Jammu & Kashmir, and never wanted to escalate the tension in the region.

''Pakistan wants peaceful relations with India based on the principles of equality, dignity and self-respect,'' he added.

Sartaj Aziz said Kashmiris were peacefully struggling for their rights, but India wanted to divert international community's attention by terming their struggle terrorism.

He said Pakistan would continue its efforts to find a peaceful solution to the Kashmir problem in accordance with the United Nations Security Council resolutions based on the aspirations of Kashmiri people. He said India must resolve the Kashmir issue politically instead of using force against the peaceful struggle of Kashmiris.