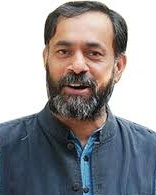 Mumbai: BJP's electoral success in recent months will trigger a political realignment in the country, while a poll-battered Congress will cease to be a nationwide force, well-known psephologist, political analyst  and Aam Aadmi Party leader and spokesperson Yogendra Yadav, said.

Yadav, however, does not see a bipartisan polity emerging in the country, where multi-party democracy has been a norm, though BJP's victories in Lok Sabha election and also Assembly polls in Haryana and Maharashtra are significant.

"It is not whether BJP will grow any further to have a Congress versus BJP politics. Congress will shrink and there are questions about its survival in the next five years. More than electoral defeats, Congress will cease to be a nation- wide political force," he said.

Yadav was speaking at a media interaction organised by Mumbai Press Club on 'Understanding the Math of the Modi Wave, and what it holds for the future'.

The saffron outfit's wins at the hustings will trigger a political realignment with BJP forming one pole, while those opposing it on the other side of the spectrum, he said.

"Congress does not know how to aggressively take on the Government on the street. Anti-BJP coalitions like in Bihar will yield short-term gains and long-term losses. They will consolidate the BJP's position further."

The decline of Congress poses a challenge to the idea of India and throws up various possibilities, noted the academician, who unsuccessfully fought Lok Sabha polls.

Analysing the events leading to phenomenon of `Modi wave', Yadav said the Anna Hazare-led anti-corruption movement, a section of which later formed the AAP, finished the moral legitimacy of the Congress-led UPA Government.

He said voters searched for alternatives as there were anxieties on governance, leadership and development fronts. In run up to the elections 2014, there was a yearning for a strong leadership, someone who carries conviction and has a mind of his own, the political commentator observed.

There was a sense of fatigue among people with welfare state and the UPA was identified as a regime based on doles and subsidies, Yadav said.

People are wondering if UPA leadership cared about growth and at this juncture and "the myth of Gujarat model of development" was propagated and it made an impact, he said.

There was also the majority-minority angle and "there was a view whether the majority should feel embarrassed about who they were", he said.  Yadav said in his view all this was against the idea of India.