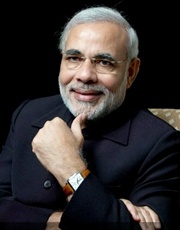 Prime Minister Narendra Modi will launch the 'Swachh Bharat' mission on Thursday aimed at creating a 'clean India' in the next five years.

The mission will have participation from almost all ministries of the centre and Modi would launch it with a symbolic broom in his hand on 2 October, the birth anniversary of Mahatma Gandhi, and reach out to all Indians to make cleanliness a mass movement.

About 3.1 million employees are expected to take cleanliness pledge tomorrow.

Preparations are being made in government offices and also by the Bharatiya Janata Party leaders in Delhi for large participation in "cleanliness oath" to be taken on Thursday.

Giving a call to the nation on 15th August 2014, the Prime Minister of India announced that ''all schools in the country should have toilets with separate toilets for girls and that this target should be completed within one year''.

To fulfil this very initiative/vision, the union minister for human resource development Smriti Irani released a ''Handbook on Swachh Bharat - Swachh Vidyalaya'' in New Delhi today, which will encourage maintenance of hygiene and cleanliness in all schools across the country. The handbook states that a Swachh Vidyalaya should have neatness and orderliness, clean drinking water spaces, clean toilets and tidy classrooms and compounds.

Several good practices from many states have been captured in the handbook as example to be emulated by children and schools. The handbook speaks to students, teachers, parents and school management members in order to make them realise Gandhiji's dream of Swachh Bharat in their very own Vidyalayas and to make an ideal Swachh Vidyalaya inspired by Gandhiji's pronouncement - ''Be the change you wish to see in the world.''

Inspired by Gandhiji's pronouncement - ''Be the change you wish to see in the world'', the Handbook aims at promoting behavioural change in school children so that they become agents of change in the society. 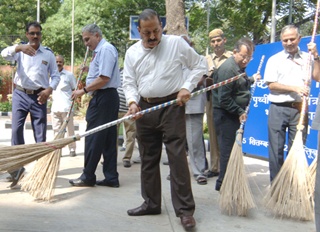 The special cleaning drive started by the ministry of home affairs under 'Swachh Bharat'' campaign was launched by home minister Rajnath Singh on 25 September and the campaign continued vigorously and has been strengthened further through a surprise inspection by Anil Goswami, the union home secretary on 1 October.

After inspecting different rooms, the home secretary expressed satisfaction over the ongoing cleanliness activities and impressed upon the section officers and other employees of the ministry to adopt this campaign as a part of day-to-day activity.

The launch was preceded by cleanliness campaign week beginning September 25 which saw central government offices being spruced up by discarding or overhauling old furniture and sending old files to record rooms.

The launch of the mission comes in the wake of a perception about Indian cities not being very clean. A number of people in rural areas still do not have access to toilets. Some schools in the rural areas also do not have toilets.

According to Census 2011, only 32.70 per cent of rural households had access to toilets. According to a UN report released this year, India continues to have the largest number of people in the world defecating in the open.

Modi has been talking of "clean India" in his major speeches, and most people feel that personal push being given by him to sanitation would have an impact.