The Supreme Court has dismissed a batch of petitions challenging the bill on National Judicial Appointment Commission, passed recently by Parliament, saying the bill is yet to receive Presidential assent and become an Act. 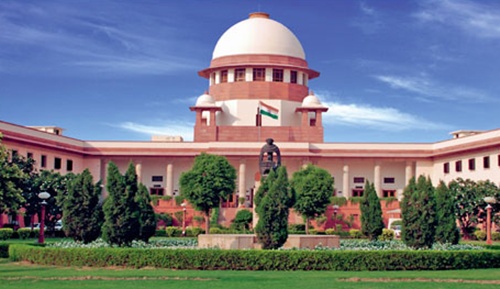 Dismissing the petitions challenging the National Judicial Appointment Commission (NJAC) Bill, which envisages a change in the present system of appointments to higher judiciary through the CJI-headed collegium system, the apex court termed the petitions as "premature".

A three-judge bench headed by Justice Anil R Dave declined to admit the petitions for hearing and kept all issues raised by petitioners open, to be argued at what it called ''at an appropriate stage.''

The court order came after Attorney General Mukul Rohatgi informed the court that the issues relating to the Constitution amendment bill and the National Judicial Appointment Commission (NJAC) Bill are still within the sphere of Parliament and hence could not be subjected to judicial review.

The Constitution, the A-G pointed out, provided for completion of various stages before a bill becomes a law and hence any interference with the parliamentary process was uncalled for.

Appearing for the Supreme Court Advocates-on-Record (AoR), senior advocate Fali S Nariman, however, said the moot issue whether the amendment bill and the NJAC bill could be challenged at this stage or not should then be sent to a five-judge Constitution bench for consideration.

Nariman had requested the Supreme Court to quash the 121st constitutional amendment and the validity of the NJAC bill, by which the collegium system for appointment of judges was proposed to be scrapped and a new mechanism under National Judicial Appointment Commission (NJAC) was proposed to be put in place.

The petition, drafted by advocate Subhash Sharma, claims that the amendment bill, as passed by both the houses of Parliament, ''severely affects and damages the basic structure of the Constitution, viz, the independence of the judiciary'' and accord ''unbridled power'' to Parliament (See: Modi govt gets Lok Sabha nod for judicial appointments bill)

Questioning the composition of six-member NJAC, the plea cited the provision in the NJAC Bill, which provides that ''the Commission shall not recommend a person for appointment if any two members of the Commission do not agree for such recommendation''.