The NDA government is going ahead with a planned reconstitution of the boards of trustees of all the 12 major ports in the country, as part of a clean-up drive against political appointees in port trusts. 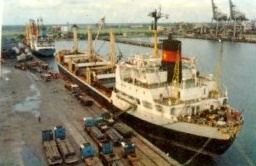 Shipping ministry officials said the process of weeding out political nominees has already begun and that the reconstitution of the boards is expected to be completed within a couple of weeks.

The Narendra Modi-led government is implementing a weeding-out programme across all important offices, which involves the removal of all nominees appointed by the Congress-led UPA government on political considerations.

The idea is that port trusts should not become parking slot for local politicians who often misuse their position to influence contracts. "It is likely that the political nominees will have to vacate the posts to make way for the new members," a senior shipping ministry official said.

It is also important from the f administrative point of view not to have politicians on plum posts on the board of all the major ports.

The move follows last week's decision to terminate the advisory councils at all government ports constituted during the UPA regime.

Shipping ministry wants to grant representation to environment and forest departments in the port advisory boards as these departments have a role in deciding port projects .

The board of trustees in the major ports currently include officials from departments like customs and railways who are associated with port activity as also port users and other interested parties. There is also a general category where often politicians are nominated.

"There is a need to amend the law of appointing trustees. It should be more professional and company like. People who have expertise and knowledge of the area should be brought in," said K Mohandas, former shipping secretary.

Industry also considers the move as a wise one considering it is one of the important aspects that needs to be considered for any port project. In the past various projects have been held up because of environment clearance.

However, port officials expect the government's move to bring about significant changes in the process of selection of board of trustees.

Of the 12 major ports, except Ennore (which is incorporated as a company) all others are managed by board of trustees.

The shipping ministry, which is also looking at ways to earn revenue from shore handling operations on the major ports also wants more professionals in port managment.

Kolkata Port has recently been asked to implement its proposal to levy royalty on cargo handling operations at the Haldia Dock Complex based on an open and transparent auction process.

For the remaining ports a committee, headed by Cochin Port Trust chairman Paul Anthony is working out the modalities for revenue sharing in on-shore operations.