Narendra Modi was sworn in as India's 15thPrime Minister (including acting prime minister Gulzarilal Nanda in the mid-'60s) at a grand ceremony attended by approximately 4,000 guests, including heads of state, representatives and envoys of foreign countries attending in large numbers, at the forecourt of the Rashtrapati Bhavan. 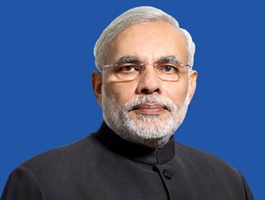 All 777 MPs of both Houses, the outgoing PM and his council of ministers, all governors, CMs (except Kerala CM who had already opted out), ambassadors and other constitutional authorities like the Chief Justice of India are among those who attended the event.

Bangladesh Parliament Speaker Shirin Chaudhury represented her country as Premier Sheikh Hasina was on a visit to Japan. This is the first time that the heads of states of SAARC nations have been invited to attend the swearing-in ceremony of an Indian prime minister.

Speaking to reporters in Lahore before leaving for New Delhi, the Pakistan prime minister said, ''Pakistan wants good relations with India and I am going to New Delhi with a message of peace''.

Envoys of almost all the countries having embassies in Delhi have been invited for the function.

The BJP Overseas Affairs, an arm of the Bharatiya Janata Party (BJP) that maintains contact with people and political parties abroad, has also invited around 90 people to the swearing-in.

A cursory look at this list shows Uttar Pradesh, Bihar and Maharashtra have got a significant chunk of ministries. This may also be due to the assembly elections due in these states later this year.

Madhya Pradesh, Rajasthan and Gujarat are seriously under-represented- despite the massive mandate they gave the BJP.

BJP's NDA allies are also minimally represented, with Shiv Sena, LJP, TDP and Akali Dal being given one cabinet post each.

Some senior party leaders, including Amit Shah, Mukhtar Abbas Naqvi and Rajiv Pratap Rudy, did not make it to the list as they have been tasked with carrying on party work ahead of the assembly elections in some crucial states like Maharashtra and Haryana later this year.

There are also no surprises, as earlier expected, in terms of many new faces; instead some exclusions like those of Arun Shourie and Suresh Prabhu, for example, were pronounced. Prabhu, a senior Sena member, is not a favourite of the Thackerays of the Shiv Sena.

It is also not clear how, since many of the small ministries will be merged to create more synergies, who will handle these portfolios and how it will be allocated to ministers of state.

After all, Modi is not all BJP and the party cannot get rid of all old faces without losing credibility. However, since all of them owe their positions to Modi, the prime minister, unlike in the UPA ministry will have a decisive say in how they run their ministries.

Meanwhile, massive ground-to-air security arrangements on the lines of Republic Day have been made for Narendra Modi's swearing-in. The area around Rashtrapati Bhavan and other areas in Lutyen's Delhi have been turned into a fortress with over 7,000 personnel of special commandos and paramilitary forces along with the Delhi Police on duty.

Two unmanned aerial vehicles 'drones' hovered over the Rashtrapati Bhavan accompanied by anti-aircraft guns on ground, with the Army and the Air Force as also the intelligence agencies assisting the Delhi Police.

President Pranab Mukherjee is hosting a private dinner for SAARC leaders and Modi and his council of ministers in the Grey Room of Rashtrapati Bhavan.

The council of ministers