A special meeting of the union cabinet today cleared the draft Telangana bill, which makes Hyderabad the joint capital of the bifurcated Seemandhra and Telangana states. 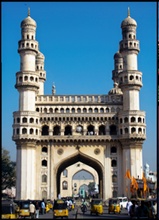 Hyderabad will be a shared capital for 10 years, after which it will belong to the new state of Telangana, as per the earlier announcement.

The controversial bill that has been opposed by the state government and legislators belonging to the Seemandhra region, is now expected to be introduced in Parliament next week.

The cabinet cleared the 'AP Reorganisation Bill' as recommended by the group of ministers (GOM) with Hyderabad as the joint capital, with no major changes.

Union ministers from Seemandhra have demanded conversion of Hyderabad into a union territory for a limited period and incorporating Bhadrachalam sub-division with residuary Andhra Pradesh.

Against the wishes of leaders of Seemandhra, the cabinet decided against giving Hyderabad the status of union territory.

The governor has been put in charge of law and order of Hyderabad.

Earlier in the day, members from Andhra Pradesh cutting across party lines began shouting slogans for and against creation of Telangana and entered the well of the Lok Sabha forcing an adjournment of the proceedings.

In the Rajya Sabha, members belonging to Chandrababu Naidu's Telugu Desham Party (TDP) rushed to the well carrying banners that read 'Save Andhra Pradesh' to oppose creation of Telangana.

The Telangana bill, when passed in both houses of Parliament, will make politics in Andhra Pradesh more volatile, leading to a realignment of forces in the state.

Chief minister Kiran Kumar Reddy has already announced plans to float a new party once the Telangana bill is tabled in Parliament.