Parties unite to save criminal politicians from SC ban

Politicos of all hues ganged up in Parliament on Friday to save their ilk with criminal background and passed a bill in the Lok Sabha upholding the right of those in jail to contest elections, provided, of course, they have appealed their case. 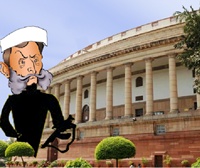 The bill having already been passed by the Rajya Sabha on 27 August, will now become a law after the President signs on it.

While the government and indeed almost all political parties hold that the SC order barring those convicted in a criminal case from contesting the election to a state legislature, Parliament or continuing in office, the Supreme Court refused to subscribe to their view that an appeal would clear a criminal of any crime.

The Lok Sabha passed a bill on Friday that maintains the right of those in jail to contest polls and represent the people, with the government saying the Supreme Court verdict was wrong and that the legislature has a constitutional duty to correct it.

The Representation of the People (Amendment and Validation) Bill, 2013 was rushed through in the Lok Sabha and passed within about 15 minutes with support from almost all parties - centre, left and right.

The legislation followed Supreme Court's rejection of an appeal by the ruling United Progressive Alliance (UPA) and some of the opposition parties.

Showing apprehension that the apex court's order cold be misused and wrongly interpreted, Sibal said, "If an SHO decides to detain you on the eve of elections, then you cannot file nominations. ... It is our constitutional duty to correct it."

With an overwhelming majority of the House, including leader of the opposition Sushma Swaraj, pushing for the passage of the amendment bill even without discussion, some members' demand for an elaborate debate on the bill went unheard.

The bill nullifies the 10 July order of the Supreme Court, which held that those in jail cannot vote as per the Representation of Peoples Act and hence cannot qualify for contesting elections to Parliament or state legislatures.