On the eve of India's United Progressive Alliance government completing four of its five-year tenure, several opinion polls showed that the people, at least in urban areas, are deeply disappointed with its performance. 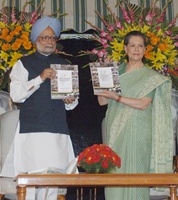 Prime Minister Manmohan Singh is expected to present a state-of-the-nation report on the performance of UPA-II, as the second term of the Congress party-led government has been dubbed by the media.

Both these schemes have been severely criticised by economists as a waste of funds in the absence of a delivery network. But they are apparently pet projects of Sonia Gandhi, the Congress president and UPA chairperson.

Opinion polls conducted by various TV news channels show that the urban electorate at least is disappointed with the government's performance. Numerous 'scams' – several of them involving cabinet ministers - have not helped the UPA cause.

A Headlines Today-CVoter opinion poll predicted that the government's tally would crash by 95 Lok Sabha seats in the 2014 General Elections.

Pointing to yet another fractured parliament, the poll found that the UPA's loss would not translate into big gains for the main opposition at the centre, the Bharatiya Janata Party-led National Democratic Alliance (NDA).

"The lion's share of the seats would be cornered by smaller (state-evel) parties which have not yet laid their cards on the table. The NDA might add just 27 more seats to its 2009 tally," the poll said.

A CNN-IBN Urban India poll showed that people were largely dissatisfied with the UPA-II government, and a majority believe that it does not deserve another term.

This survey indicated that Prime Minister Manmohan Singh – more than 80 years of age - faces a credibility problem as he is seen as a mere figurehead, incapable of putting his foot down or realising India's much-vaunted 'demographic dividend', as the population explosion is now termed.

The poll showed that the prime minister's performance in the UPA's second term was rated as poor by more than half of the respondents; and 61 per cent felt he should be replaced.

Price-rise was seen as the biggest factor, closely followed by corruption.

Not unexpectedly among urban respondents, Gujarat Chief Minister Narendra Modi was the most preferred for the next prime minister. He got more than twice the votes of Congress vice president Rahul Gandhi, the projected leader of the Congress – who is perceived as weak and clueless.

On the 'Modi effect' in next year's elections, Headlines Today's findings were mixed. They suggested that projecting Modi as the NDA's candidate for PM would lead to gains for the UPA, but would at the same time almost double the advantage for the NDA in number of Lok Sabha seats.

The UPA will likely get 23 more seats and the NDA 41 more if Modi is the NDA's prime ministerial face, the poll says.

For Bihar – famously led by 'progressive' Chief Minister Nitish Kumar in a shaky alliance with the BJP - the opinion poll said the tally of Kumar's Janata Dal-United could drop to half if it dumps the NDA, while the BJP can win 18 seats in Bihar on its own if it projects Modi as its leader.

"The BJP is emerging as the single biggest party with 137 seats, a jump of 21 from its total in 2009 with the Congress finishing second at 116," the Headlines Today poll concluded.