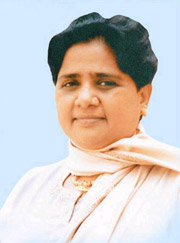 The Supreme Court today decided to examine a plea seeking the prosecution of former Uttar Pradesh Chief Minister Mayawati in the Taj corridor case even without the sanction of the governor.

"We will examine the case," a bench comprising justices H L Dattu and Ranjan Gogoi said on the plea challenging a judgement of the Allahabad High Court order dismissing a bunch of public interest cases against Mayawati on the ground that gubernatorial sanction was missing.

The petitioners today contended that though the then governor in T V Rajeshwar had in 2007 refused to grant sanction for the prosecution of Mayawati and her then cabinet colleague and environment minister Naseemuddin Siddiqui, the trial court should have proceeded with the criminal proceedings without the sanction.

Besides Mayawati, the apex court also issued notice to the union government, the Central Bureau of Investigation, the Uttar Pradesh government and Siddiqui, seeking their response within four weeks to the petition which contended that the governor's sanction was not required for prosecution for offences under the Indian Penal Code (IPC) and the Prevention of Corruption (PC) Act.

The case against them in what has become known as the Taj corridor scam, said to be worth Rs177 crore, had been registered under sections 120B (criminal conspiracy), 420 (cheating), 467 (forgery of valuable security), 468 (forgery for cheating) and 471 (using forged document as genuine) of the IPC and sections 13(1)(d) (abuse of official position) read with 13(2) (punishment) of the PC Act.

Mayawati's counsel and senior advocate K K Venugopal said this was the fourth time such a submission has been made against her, but the bench decided to examine the issue afresh.