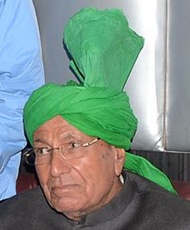 Former Haryana chief minister Om Prakash Chautala and his son Ajay Singh were today sentenced to 10 years in jail for their involvement in a scam related to the appointment of teachers for state-run schools.

Eleven others, including the three main accused in the case - Sanjiv Kumar, Vidya Dhar and Sher Singh Badshami - were also handed out 10-year jail sentences.

Altogether the judgement covered as many as 54 persons, including senior administrative officials, all of whom have got various sentences.

The sentencing in a Delhi court by Special CBI Judge Vinod Kumar could have major political ramifications in neighbouring Haryana, where Chautala, head of the Indian National Lok Dal has been chief minister for four terms.

The sentencing itself was delayed by a few hours as violent protests broke out outside the court premises in the morning.

Protesting INLD workers alleged a political conspiracy against the Chautala family and clashed with policemen. The police had to resort to a lathi-charge and fire teargas shells to disperse the crowd, which threw rocks and even crude bombs outside the court.