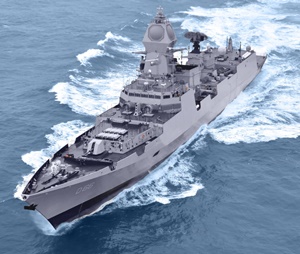 The event marks the formal induction of the first of the four ‘Visakhapatnam’ class destroyers, indigenously designed by the Indian Navy’s in-house organisation Directorate of Naval Design and constructed by Mazagon Dock Shipbuilders Limited, Mumbai.
Rajnath Singh said INS Visakhapatnam is a symbol of the country’s growing maritime prowess and a major milestone in achieving Prime Minister Narendra Modi’s vision of ‘Make in India, Make for the World’.
The state-of-the-art ship, equipped with latest systems and weapons, will strengthen the maritime security and protect the interests of the nation, he said, adding that the ship is one of the most technologically advanced guided missile destroyers in the world, which will cater to the present and future requirements of the armed forces and the nation.
INS Visakhapatnam measures 163 metre in length, 17 metre in breadth with a displacement of 7,400 tonnes and can rightfully be regarded as one of the most potent warships to have been constructed in India. The ship is propelled by four powerful gas turbines, in a combined gas and gas (COGAG) configuration, capable of achieving speeds in excess of 30 knots. The ship has enhanced stealth features resulting in a reduced Radar Cross Section (RCS) achieved through efficient shaping of hull, full beam superstructure design, plated masts and use of radar transparent materials on exposed decks.
The ship is packed with sophisticated state-of-the-art weapons and sensors such as surface-to-surface and surface-to-air missiles. It is fitted with a modern surveillance radar which provides target data to the gunnery weapon systems of the ship. The anti-submarine warfare capabilities are provided by the indigenously developed rocket launchers, torpedo launchers and ASW helicopters. The ship is equipped to fight under Nuclear, Biological and Chemical (NBC) warfare conditions.
A unique feature of this ship is the high level of indigenisation incorporated in the production, accentuating the national objective of ‘Aatmanirbhar Bharat’. Some of the major indigenised equipment/system onboard INS Visakhapatnam include Combat Management System, Rocket Launcher, Torpedo Tube Launcher, Integrated Platform Management System, Automated Power Management System, Foldable Hangar Doors, Helo Traversing system, Close-in Weapon System and the Bow mounted SONAR.
Named after the historic city of Andhra Pradesh on the east coast, Visakhapatnam, the ‘City of Destiny’, the ship has a total complement of about 315 personnel. Enhanced crew comfort is a significant feature of INS Visakhapatnam, which has been ensured through ergonomically designed accommodation based on ‘modular’ concepts. The ship will be under the command of Captain Birendra Singh Bains, a Navigation & Direction specialist.
With the changing power dynamics in the Indian Ocean Region, INS Visakhapatnam will augment the Indian Navy’s mobility, reach and flexibility towards accomplishment of its tasks and goals, defence minister Rajnath Singh said.
Chief of the Naval Staff Admiral Karambir Singh, Member of Parliament Arvind Sawant, Flag Officer Commanding-in-Chief, Western Naval Command Vice Admiral R Hari Kumar, chairman and managing director, Mazagon Dock Shipbuilders Limited, Vice Admiral Narayan Prasad (Retd) and other senior civil and military officials of the ministry of defence were present during the commissioning ceremony of INS Visakhapatnam.
MORE REPORTS