A seminal achievement was accomplished in the quest for technologies related to operation of indigenous fighter aircraft from aircraft carriers. On 29 September 2019, 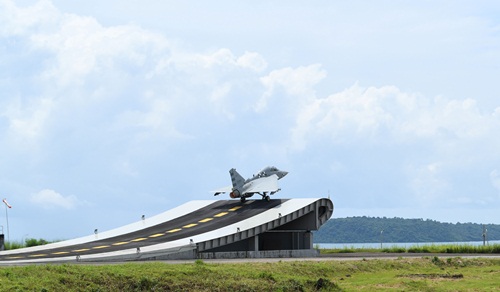 LCA Naval Prototype-2 accomplished a seminal achievement in flying aircraft from indigenous aircraft carriers with a successful sortie from the shore-based INS Hansa in Goa
The LCA was launched off the ski jump at 1621 hours from INS Hansa and was subsequently “trapped” at 1631 hrs on the arresting gear site (both locations situated at Shore Based Test Facility INS Hansa in Goa).
While both these activities had been achieved individually earlier, this was the first occasion when the complete cycle of launch and recovery necessary for aircraft carrier operations was accomplished in a single sortie.
Being a pioneering technology acquisition and demonstration programme for the unique Short Take-Off but Arrested Recovery (STOBAR) concept of aircraft operations, the LCA (Navy) team has had to conceptualise and experiment with complex software modes from a clean slate. All this had to be done while tentatively exploring and incrementally expanding the structural capabilities of the aircraft to withstand the brutal requirements of carrier operations.
The exploratory nature of this stage of the programme necessitates experimentation with multiple software options and hardware configurations. These include multiple configurations of aerodynamic surfaces, different flight control strategies, avionics tools and display symbols to ease the piloting task, multiple iterations to the “mechanicals” (dampers/structural members/contact points) etc.
Comprehensive and seamless integration of all these experimental variants simultaneously into a single platform is therefore not possible till all options have been evaluated and the preferred configuration has been decided, a defence ministry release stated.
The events on 29 September 2019, therefore, demonstrate the completion of the basic exploration phase of the programme and transition to refinement and improvement iterations.
Defence minister Rajnath Singh congratulated DRDO, ADA, HAL and Indian Navy for this major feat. Secretary, Department of Defence, R&D and chairman DRDO G Satheesh Reddy also congratulated DRDO, ADA, HAL and Indian Navy for the achievement.
MORE REPORTS