Admiral Robin K Dhowan has taken over as Chief of Staff of the Indian Navy, nearly two months after Adm D K Joshi quit as naval chief in the wake of a series of mishaps involving naval vessels. 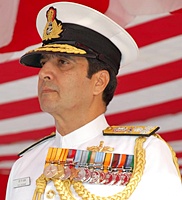 Adm Dhowan, 59, who has been the acting Navy Chief since Joshi's exit, will have a tenure of 25 months, and will retire in May 2016.

Adm Joshi resigned on 26 February following the mishap involving submarine INS Sindhuratna in which two Navy officers were killed and several others were injured.

In August last year, submarine INS Sindhurakshak sank at the Naval Dockyard in Mumbai, killing 18 personnel on board.

Adm Sinha was edged out of the race, apparently because majority of the 14 mishaps, including two major submarine accidents, that took place in the Western Command during the last 10 months.

Adm Dhowan PVSM, AVSM, YSM, ADC, was commissioned in the Indian Navy on 1 January 1975. He is a navigation and direction specialist who has served with distinction in the command, staff and instructional appointments through his exemplary career spanning 40 years.

Adm Dhowan has commanded the Eastern Fleet as Flag Officer Commanding Eastern Fleet and served as Chief of Staff at Headquarters Eastern Naval Command, Visakhapatnam. He also has the distinction of commanding the prestigious 'National Defence Academy', his alma mater as the Commandant.