Foreign ministers of India, the United States, Japan and Australia have agreed to step up coordination in creating a free and open Indo-Pacific, amidst China's growing assertiveness in the strategically vital region. 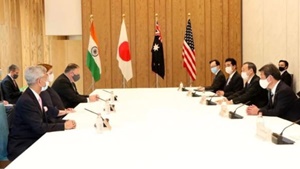 In their first face-to-face meeting, in Tokyo, the four leaders - Japan's foreign minister Toshimitsu Motegi, India’s foreign minister Subrahmanyam Jaishankar, Australian foreign minister Marise Payne and US Secretary of State Mike Pompeo - discussed the Indo-Pacific security situation amidst the challenges posed by a belligerent and confrontationist China.
Ahead of the Quad security dialogue in Tokyo, US secretary of state Mike Pompeo on Tuesday called for formalising the informal grouping to build a “true security framework” that could counter the challenge posed by an aggressive China. In an interview with Nikkei Asia Pomeo said other countries could also become part of this framework at “the appropriate time.”
Tuesday’s meeting was the first face-to-face interaction between the foreign ministers of the four Indo-Pacific countries - the US, India, Japan and Australia - since the coronavirus pandemic broke out in China’s Wuhan in December last.
In his initial comments at the Quad meet, foreign minister S Jaishankar underlined that the world had “profoundly transformed” since then.
India, which had been preparing to host Chinese President Xi Jinping, has spent the last 150 days engaged in a bitter standoff with China’s People’s Liberation Army that has led to deaths on both sides.
In fact, China’s relations with all four Quad members as also many other countries, including members of the European Union, have nosedived over the last six months, after Beijing was blamed for the spread of coronavirus disease that has infected as many as 35,347,404 people so far, including 1,039,406 deaths.
“This is the Chinese using coercive power. This isn’t how great nations operate. So our mission is to reduce that,” Pompeo told Nikkei Asia.
“As partners in this Quad, it is more critical now than ever that we collaborate to protect our people and partners from the CCP’s (Chinese Communist Party) exploitation, corruption and coercion,” Pompeo said.
“We see it in the South and East China Seas, the Mekong, the Himalayas, the Taiwan Strait.”
Stephen Biegun, the US deputy secretary of state, had hinted what a formalised Quad could look like last month when he noted at an online seminar that the Indo-Pacific region didn’t have “strong multilateral structures”.
“They don’t have anything of the fortitude of NATO, or the European Union… There is certainly an invitation there at some point to formalise a structure like this,” he said.
In a statement issued after Tuesday’s Quadrilateral Security Dialogue, the Indian external affairs ministry said the foreign ministers would hold the consultations “regularly”.
“The foreign ministers exchanged views about regional issues of mutual interest, and issues related to connectivity; humanitarian assistance and disaster relief; maritime safety and security; health security, and counter terrorism. They reaffirmed their collective vision of maintaining a free, open and inclusive Indo-Pacific. They reiterated their firm support to ASEAN centrality and highlighted their readiness to work towards realising a common vision for the Indo-Pacific. Appreciating the value of these consultations, they agreed to hold them regularly,” the statement read.
The four major Indo-Pacific democracies, collectively known as the Quad, vowed to coordinate in ensuring peace and stability of the region, Kyodo news agency quoted the statement as saying.
The meeting of the foreign ministers of the 'Quad' took place in the backdrop of China's aggressive military behaviour in the Indo-Pacific, South China Sea and along the Line of Actual Control (LAC) in eastern Ladakh.
Addressing the 2nd Quad ministerial meeting, Prime Minister Suga said a free and open Indo-Pacific is "widely recognised by the international community as a vision of peace and prosperity of this region," and that his government's basic policy is to "further continue advancing our members to this end."
Suga, who assumed the premiership last month, underscored the need to deepen quadrilateral ties, particularly as the novel coronavirus has spread globally.
"The international community is facing multiple and various challenges. This is exactly why right now is the time that we must further deepen our coordination with as many countries as possible that share our vision," he said.
China is engaged in hotly contested territorial disputes in the South and East China Seas. Beijing has also made substantial progress in militarising its man-made islands in the past few years.
Beijing claims sovereignty over all of the South China Sea. But Vietnam, Malaysia, the Philippines, Brunei and Taiwan have counterclaims. In the East China Sea, China has territorial disputes with Japan.
The South China Sea and the East China Sea are stated to be rich in minerals, oil and other natural resources. They are also vital to global trade. Although the US lays no claims to the disputed waters, it has challenged China's growing territorial claims in the South China Sea by deploying warships and fighter jets to assert freedom of navigation and overflight patrols in the strategically vital region.
Meanwhile, Japan has lodged a protest against China's creation of a digital museum laying out its claims to a group of Japan-controlled islets in the East China Sea, the government's top spokesman said on Monday.
"The Senkaku Islands have been recognised historically and under international law as an inherent part of Japan's territory and we maintain effective control over them," Kyodo news agency quoted Chief Cabinet Secretary Katsunobu Kato as saying at a press conference.
China is "not in a position" to create such a website regarding the islets, Kato said, adding that Japan has demanded through diplomatic channels that it be taken down.
The dispute over ownership of the uninhabited islets, which China calls Diaoyu, has often strained Japan-China relations. China frequently sends coast guard or government ships to nearby waters in a bid to push its claims to them, the report said.
MORE REPORTS