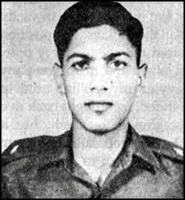 This is the sixth graphic novel in a series that honours of the Indian Army's war heroes, including Param Vir Chakra (PVC) and Ashok Chakra (AC) winners and other military heroes and martyrs.

Arun Khetarpal, a tall handsome young man of 21 years died fighting off an attack by a brigade worth of Pakistani Patton tanks, himself destroying five tanks in the battle that ended with the destruction of 48 Pakistani tanks in the 1971 war.  Khetrapal engaged the Pakistani army with his tank Famagusta, a British MKII Centurion that was hit and caught fire. He was ordered to abandon his tank and save himself, but he refused to back off.

''My gun is still firing'' he said, wounded and profusely bleeding, he went on to destroy two more Pakistani tanks. Khetarpal was killed in this exchange of shots but the Pakistani tanks were forced to break contact and flee. They lost a staggering 48 tanks in this epic battle.

The hero of the battle was undoubtedly the young and intrepid 2nd Lt Arun Khetarpal, PVC, who had laid down his life but stopped the enemy tank charge dead in its track and thereby saved the infantry who had established the bridge head across the Basantar River.

A unique feature of the book launch was an audio visual presentation on the life and exploits of 2nd Lt Arun Khetrarpal, PVC by the author.

Samir Jain of Bodha Guru learning Pvt Ltd presented the interactive application of the graphic war novel in a digitised format - for viewing on laptops/Ipads/digital tablets.

Indian war comics collaborated closely with Bodha Guru in delivering the latest book as an interactive app, which will shortly be released on Android and Apple iOs based mobile platform.

This interactive app for a comic book claims to be a first in India.